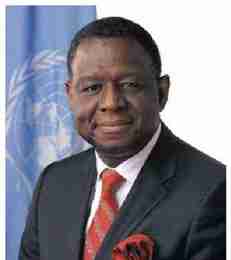 UNITED NATIONS — The head of the U.N. population agency, Babatunde Osotimehin, who was a global leader in promoting public health and sexual and reproductive health and rights especially for women and girls, died suddenly at his home, the agency announced Monday.

Osotimehin, who was 68, had led the United Nations Population Fund, known as UNFPA, since 2011. The agency said he passed away Sunday evening.

Born and trained as a doctor in his native Nigeria, Osotimehin was the country’s minister of health before taking the reins of UNFPA with the rank of undersecretarygeneral. Prior to that, he was director-general of the National Agency for the Control of AIDS.

As head of UNFPA, he spearheaded efforts to advance the breakthrough action plan adopted by 179 countries at the 1994 U.N. population conference in Cairo. It recognized for the first time that women have the right to control their reproductive and sexual health and to choose whether to become pregnant.

UNFPA called his death “a devastating loss” for the agency “and for the people, especially women, girls and youth, he dedicated his life to serving.”

“Dr. Osotimehin was bold and never afraid of a challenge and his strong leadership helped keep the health and rights of the world’s women and girls high on the global agenda,” UNFPA said in a statement. “He understood that the world’s 1.8 billion young people are truly its greatest hope for the future.”

The Trump administration, which has banned U.S. funding for international groups that perform abortions or provide abortion information, recently announced that it was cutting all funding to UNFPA.

He was married, had five children and several grandchildren, UNFPA said.

No funeral arrangements have been announced.