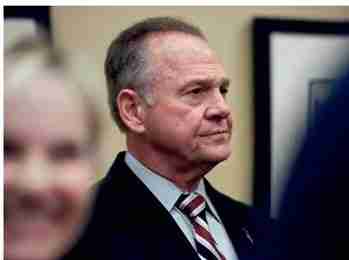 By HOPE YEN and KEVIN FREKING

WASHINGTON – One of the Senate’s most moderate Democrats is helping Republican Roy Moore’s Democratic challenger raise campaign funds, underscoring the party’s wary approach in an Alabama race that until recently was viewed as a virtually certain win for the GOP.

The fundraising bid by Sen. Joe Donnelly, D-Ind., doesn’t mention allegations that Moore had sexual contact with a 14-year-old girl and pursued romantic relationships with other teenage girls decades ago.

“Doug’s opponent, Roy Moore, is an extremist with a record of putting political ideology above the rule of law,” Donnelly wrote in a weekend email soliciting contributions for Democrat Doug Jones. Moore and Jones face a Dec. 12 special election to replace GOP Sen. Luther Strange, who Moore defeated in a party primary.

Donnelly’s email also cites Jones’ background as “the son of a steelworker” and a prosecutor who “worked to lock away members of the KKK and terrorists for despicable acts of violence,” using the acronym for the Ku Klux Klan.

Donnelly faces re-election next year and is considered one of his party’s most endangered incumbents.

In a further indication of Democrats’ caution, No. 2 Senate Democratic leader Richard Durbin dodged a question Sunday about what the Senate should do if Moore is elected and tried shifting the focus back to Republicans.

“President Trump is the leader of the Republican Party in America.

It’s his responsibility to step forward and say more and do more when it comes to the situation in Alabama,” Durbin, D-Ill., said on CNN’s “State of the Union.”

Moore said a lawsuit will be filed over The Washington Post report that detailed the allegations against him.

While pressure to quit the race four weeks before Election Day intensified from within the Republican Party, Moore assured supporters Sunday night at a Huntsville, Alabama, gym that the Post article was “fake news” and “a desperate attempt to stop my political campaign.”

Moore said allegations that he was involved with a minor child are “untrue” and said the newspaper “will be sued,” draw ing a round of applause. The former judge also questioned why such allegations would be leveled for the first time so close to the special election in spite of his decades in public life.

“Why would they come now? Because there are groups that don’t want me in the United States Senate,” he said, naming the Democratic Party and the Republican establishment and accusing them of working together. He added, “We do not plan to let anybody deter us from this race.”

The Post story quoted four women by name, including the woman who alleged the sexual contact at 14, and had two dozen other sources.

Moore also tried to raise money from the controversy, writing in a fundraising pitch sent about midafternoon that the “vicious and sleazy attacks against me are growing more vicious by the minute.” He told supporters, “I’m counting on you to stand with me at this critical moment by chipping in a donation to help me bust through the vicious lies and attacks and get the truth out to as many voters as possible before December 12.”

Even if Moore were to step aside, his name would likely remain on the ballot. And any effort to add Strange as a writein candidate would threaten to divide the GOP vote in a way that would give the Democratic candidate a greater chance of winning.

The White House, pointedly noting that Trump did not back Moore during the primary, said Trump will likely weigh in on the Senate race when he returns from Asia later this week. The White House has already made clear that Moore should step aside if the allegations are proven to be true.

Moore is an outspoken Christian conservative and former state Supreme Court judge. The Post reported last Thursday that he had sexual contact with a 14-year-old girl and pursued three other teenagers decades earlier.

While he called the allegations “completely false and misleading,” in an interview with conservative radio host Sean Hannity he did not wholly rule out dating teenage girls when he was in his early 30s. Asked if that would have been usual for him, Moore said, “Not generally, no.”

The story stirred concern among anxious GOP officials in Washington in a key race to fill the Senate seat once held by Jeff Sessions, now the U.S. attorney general. Losing the special election to a Democrat would imperil Republicans’ already slim 52-48 majority in the Senate, which is hoping to pass a tax overhaul later this year. But a Moore victory also would pose risks if he were to join the Senate GOP with a cloud of sexual misconduct allegations.

Next post Jobless rates fell in 12 US states, hit record lows in 3