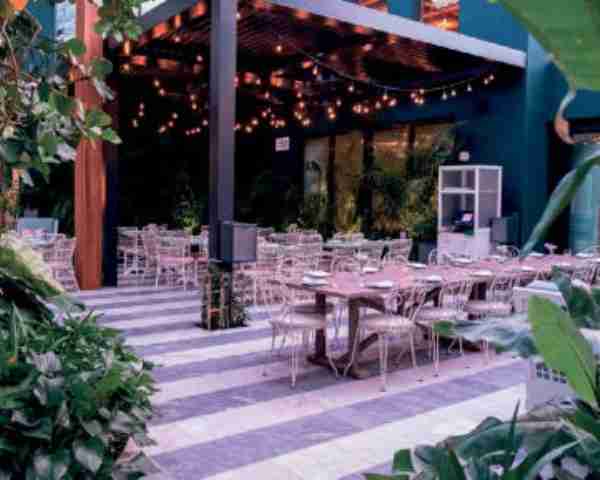 Miami (AP) – Grammy award-winning singer Pharrell may have been ﬁred from three different McDonald’s as a teen, but that didn’t stop him from opening what has become one of the hottest restaurants in Miami.

The singer hosted a soul food brunch Saturday along with his dad Pharaoh, a self-taught chef, known for his sweet and spicy Nono Sauce, as part of the South Beach Wine & Food Festival. Growing up, family meals were the heart of the Williams home, a place to “hear what’s exciting at your parent’s job.”

“Cooking is a reflection of your parents, the energy, the love. Food is a connector and it’s a meeting place.” Pharrell told The Associated Press during an interview before the brunch. Back home, Pharaoh Williams was always in the kitchen and so were his grandmothers. Favorite dishes included his dad’s chicken and pork and fried catﬁsh with a special sauce that Pharrell says was more savory than spicy.

“His seasoning was what was always so distinctive with my dad’s cooking and both my grandmothers cooked like that,” he said.

Back in the kitchen, a team of chefs hustled to carry out Pharaoh Williams’ menu, pulling mini sweet potato biscuits out of the oven and crusting copious plates of catﬁsh. Fellow Grammy winner DJ Khaled, and former “Breaking Bad” co-stars Bryan Cranston and Aaron Paul were among the guests savoring the food on a tropical jungle style patio.

Happy to leave behind his fast food days, Pharrell opened Swan restaurant and its swanky upstairs Moroccanthemed Bar Bevy in 2018 with South Beach nightlife guru and LIV club owner David Grutman. The restaurant has been a hotbed for celebrities, especially during the Super Bowl and recent Art Basel weeks, where everyone from Kanye West and Kim Kardashian West to Leonardo DiCaprio and Bono have indulged.

Grutman and Pharrell partnered with Top Chef Europe champion executive chef Jean Imbert for their restaurant, while Pharrell works on the side with a line of food products for his father.

But the “Happy” singer is clear about his role in the restaurant business – he happily stays out of the kitchen.

He has a deep appreciation for the culinary arts, comparing it to “the same way I work in music. You’re adding different sounds and things together,” he said.

Also career-wise, an upcoming ad campaign for Virginia Beach will feature a new song by the hometown superstar.

The singer, rapper and producer contacted the city last year asking how he could help after the mass shooting at a municipal building in May, Deputy City Manager Ron Williams told The Virginian-Pilot. That led to a multi-year plan involving the singer in tourism and economic development initiatives, he said.

As part of that, Williams will narrate two 60-second commercials with his soon-to-be-released song, “Virginia.”

The spring tourism campaign will also include window signs as well as items from the singer’s clothing lines emblazoned with a “We’re open” slogan.