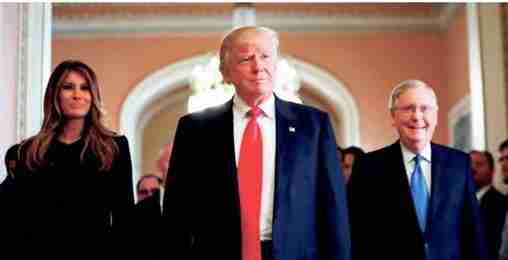 WASHINGTON – The stakes confronting Republicans determined to dismantle President Barack Obama’s health care law were evident in one recent encounter between an Ohio congressman and a constituent.

“He said, ‘Now you guys own it. Now fix it. It’s on your watch now,’” recalled GOP Rep. Pat Tiberi, chairman of a pivotal health subcommittee. “And this is a supporter.”

Republicans have unanimously opposed Obama’s law since Democrats muscled it through Congress in 2010. They’ve tried derailing it scores of times but have failed, stymied by internal divisions and Obama’s veto power.

With the Republicans controlling Congress and Donald Trump entering the White House on Jan. 20, their mantra of repeal and replace is now a top-tier goal that the party’s voters fully expected them to achieve – starting this week.

But by unwinding the statute, the GOP would kill or recast programs that provide coverage to 20 million Americans who will be wary of anyone threatening their health insurance. And continuing Republican rifts over how to reshape the law, pay for the replacement and avoid destabilizing health insurance markets mean party leaders have a bumpy path ahead.

Q: What’s first? A: Senate Majority Leader Mitch McConnell, R-Ky., and his chamber colleagues began debating a bare bones budget for next year when the new Congress convened Tuesday. Most significantly, that would trigger a special procedure letting Republicans repeal much of Obama’s law by a simple Senate majority.

That’s big because GOP senators will have only a 52-48 edge. The debate will also be a way for Republicans to signal quickly to voters that they’re starting to erase the law, even as they save actually doing it for later.

Q: And then?
A: Lawmakers will work on legislation actually repealing much of Obama’s law. The legislation is likely to erase the mandate that people buy insurance or face hefty IRS fines, which Republicans despise. Also facing elimination or reductions: taxes Obama imposed on upper-income people to finance the law, subsidies that help millions afford health care, and the expansion of Medicaid health coverage to more lower-earning people. Federal aid to Planned Parenthood would be halted, reflecting GOP opposition to the right to abortion, one of the women’s health services provided by the organization.

They hope to pass the bill by late spring, but its provisions probably won’t take effect for up to four years to give lawmakers time to craft a replacement.

This won’t be easy. Many congressional Republicans are from states like Arizona, Nevada and Pennsylvania that have added about 10 million people to Medicaid and will oppose abandoning so many voters.

Others will be nervous about voting to repeal the overall law without having replacement legislation to show constituents.

Republicans also worry that during the transition to a new system, health insurers already struggling in some states – might protect themselves by leaving some markets and boosting premiums. To ease that, GOP aides say they’re considering including some kind of stabilization fund in the repeal bill to protect insurers against losses. That remains a work in progress.

Q: Will the 20 million people now covered lose their benefits?

A: Some probably will, a byproduct of reducing Medicaid coverage and dropping the requirement that individuals buy insurance.

That could be partly offset by some who’d purchase less expensive policies because the bill will probably let insurers drop coverage for some of the 10 services they now must provide, such as outpatient care and pregnancies.

At a briefing for reporters, top House GOP aides said the goal is “universal access” to health benefits, as opposed to aiming for coverage of all Americans. They said Obama’s law ended up with many policies that are too expensive and offer limited access to doctors, but the shift in focus to “access” suggests Republicans don’t want to be measured by the number of people actually covered.

The Senate’s new minority leader, Chuck Schumer, D-N.Y., said recently that repealing Obama’s law without a replacement would mean “huge calamity from one end of America to the other.”

Q: What about the replacement legislation?

House Speaker Paul Ryan, R-Wis., has offered similar ideas plus transforming Medicare into a system that offers subsidies for buying policies. He’d tax – for the first time – the most expensive employer-provided health benefits.

The GOP effort might involve several bills, with Republicans pushing measures through Congress as they’re ready. And it will probably take years, which would put political pressure on the GOP.