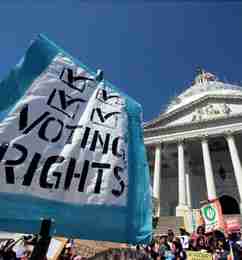 WASHINGTON – THE ISSUE:
Who should be able to vote and how easy should it be? It’s a question that goes to the core of democracy.

Voting rights are in flux in the final months of Barack Obama’s two terms as the first black president. Citing a need to combat fraud, Republican-controlled legislatures are tightening voter laws by limiting early voting and same-day registration, by requiring IDs at polling places, and more. In 2013, declaring “our country has changed,” the Supreme Court invalidated a key provision of the 1965 Voting Rights Act, which required mostly Southern states with a history of discrimination to get advance federal approval to change election laws. The court decision made it easier for states to impose new restrictions.

This year, 17 states were set to have restrictions involving voter ID or other requirements for the first time in a presidential election. Among them: the battlegrounds of North Carolina, Virginia, Ohio, Wisconsin, Arizona and Georgia.

The Obama Justice Department has challenged voter ID and other laws, saying they could restrict access for minorities and young people. In recent weeks, lower courts temporarily staved off some of the toughest requirements in North Carolina and North Dakota. Now, the total number of states with more voter restrictions than in 2012 are 15.

With the November election looming, litigation re- mains knotted up with Supreme Court appeals likely. Bills in the GOP-led Congress to restore the voting act are stalled.

WHERE THEY STAND:
Without offering specifics, Republican Donald Trump has emphasized the dangers of voter fraud, calling America’s electoral system “out of control” with people who are “voting many, many times.” He has said – without evidence – that dead voters helped elect Obama. Trump opposes same-day voter registration, saying it could allow people to “sneak in through the cracks.”

Democrat Hillary Clinton is urging Congress to restore the Voting Rights Act. She seeks a national standard of at least 20 days of early in-person voting and urges automatic voter registration for eligible 18-years old. Clinton backs voting rights for ex-felons. Her campaign has joined lawsuits to stop policies that may burden minorities, including in Arizona, where voters had to wait hours in March after cuts in polling locations.

WHY IT MATTERS:
Who gets to vote, and how easily, matters because it can determine who wins elections.

The issue is particularly salient for black Americans, who for much of U.S. history were disenfranchised and then effectively barred from voting until passage of the 1965 law. It’s also become more partisan with the rapid growth of minorities such as Latino and Asian immigrants, who tilt Democratic.

In 2008, Obama was elected with the help of a record black turnout rate that rose even higher in 2012, surpassing the white turnout rate.

That was noted by Chief Justice John Roberts, who led the 5-4 ruling that the Voting Rights Act was outdated. In dissent, Justice Ruth Bader Ginsburg argued the law is needed to stop new forms of discrimination – redrawing districts to reduce Hispanic voting, for instance, or restricting early voting near a historically black university.

It’s unclear how much voting restrictions may suppress turnout. The Government Accountability Office in 2014 found voter ID laws could reduce voting by two to three percent, particularly among young people, blacks and newly registered voters. That can tip a race in close contests. Still, voter enthusiasm for a candidate and mobilization can offset that.

GOP legislatures cite voter fraud, including those who impersonate dead people on voter registration lists. Studies found the number of actual cases was minuscule. States and the lower courts largely shape who can vote. But the next president will set the tone on federal oversight – through legislation in Congress, the prosecutorial stance of the Justice Department and nominations to the Supreme Court, which is certain to revisit Voting Rights Act powers.

If minorities continue to back mostly Democrats, the issue could decide which party gets the upper hand in elections.