President in the pews: DC church options for Biden 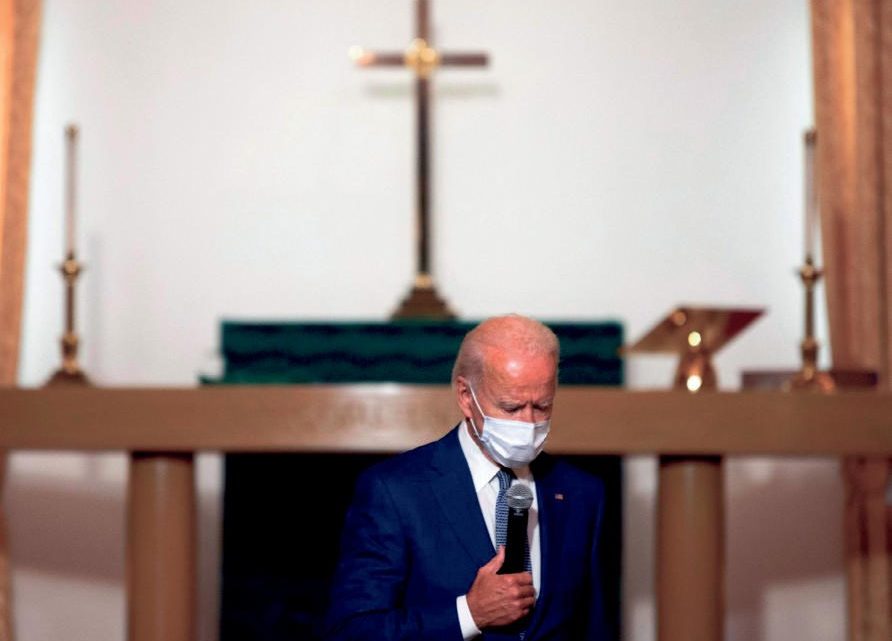 Wilmington, Del. (AP) – His motorcade thunders around Delaware, snarling trafﬁc. Everywhere he goes, a security team envelops him and a pack of journalists trails behind.

Yet President-elect Joe Biden enters his church, St. Joseph on the Brandywine, with startlingly little interruption.

Wearing a dark suit and medical mask, Biden slipped into a polished wooden pew near the back of the sanctuary for a recent Saturday evening Catholic Mass. He was one of only about 40 worshippers with attendance limited by the coronavirus pandemic. His row was empty except for a Secret Service agent sitting on the aisle and others stationed around the sanctuary. They had flak jackets under their dress clothes.

This is one of the last places where Biden can at least try to blend in, a luxury that probably will fade away completely when he takes ofﬁce next month. Once he arrives in Washington, the trappings of the presidency – and the eagerness of the city’s residents to be near power – could make a casual church visit nearly impossible.

A Biden transition team ofﬁcial refused to say which church Biden might attend in the nation’s capital or whether he might return to Delaware for services, at least to start. Washington’s COVID-19 measures restrict large indoor services, and many churches have moved services online. Biden says Americans should be allowed to attend church during the pandemic “safely,” and his transition team has underscored the importance of heeding local restrictions. Still, if he does become a regular Washington churchgoer, Biden will have plenty of choices.

Four Catholic churches sit within 2 miles (3.2 kilometers) of the White House. As vice president, Biden attended Holy Trinity Catholic Church in Washington’s tony Georgetown neighborhood, where the nation’s only other Catholic president, John F. Kennedy, frequently went to Mass before his inauguration. Previous presidents have made a wide variety of choices – or none. Not far from the White House is New York Avenue Presbyterian, which maintains the pew where Abraham Lincoln once worshipped. Even closer is St. John’s Episcopal Church, walkable across Lafayette Square from the White House for the presidents who have made a historic practice of worshipping there at least once.

St. John’s was thrust into the headlines this summer when police forcibly dispersed protesters so President Donald Trump could pose with a Bible outside its butter-yellow front doors. But its status as the “Church of Presidents” dates to James Madison, and it’s accustomed to the special scrutiny that comes with hosting commanders in chief.

The Rev. Luis Leon, rector at St. John’s from 1994 to 2018, said congregants were very good about high-powered visits: “They treated the president’s experience of worship as they would treat their own experience of worship.” The VIP presence nonetheless had its own speciﬁc effects on churchgoers’ behavior. Leon joked that, on days when the reserved “President’s pew” was occupied, the church “would get tilted” because so many congregants wanted to sit on the same side of the sanctuary as the chief executive, hoping to shake his hand during the Episcopalian exchange of the peace.

While Trump often consulted with spiritual leaders in the Oval Ofﬁce, he never adopted a home church in Washington. He preferred private prayer, including with the Rev. Jentezen Franklin, a Georgia-based megachurch pastor who recalled at least 10 visits with Trump on faith matters.

Franklin said the outgoing president “always was so receptive” of spiritual encounters.

“When we ﬁrst started meeting with him, we asked him, could we pray with him? And he was very open to that, very thankful,” Franklin said.

Former President Barack Obama and his family attended the historically Black Nineteenth Street Baptist Church in the early days of his administration. But a competition emerged among the city’s houses of worship to attract the ﬁrst family, and the Obamas ultimately never settled on a full-time church home in the capital.

Joshua DuBois, who was Obama’s faith adviser during his ﬁrst term, recalled the search for a church as “a beautiful challenge.” “On the one hand, President Obama wanted to worship as often as he could with local congregations, and to worship God and be in community with others in his new home,” DuBois said. But “we were acutely aware of the disruption of a presidential visit and wanted to be mindful, to limit that disruption as much as possible.”

President George W. Bush often opted to worship at Camp David during his years in Washington.

The Clintons were the last ﬁrst family to regularly attend church in the city. They became members of Foundry United Methodist Church, just north of the White House on 16th Street, where thenteenage Chelsea was active in the youth group.

The Rev. J. Philip Wogaman, then-Foundry’s pastor, said he would help minimize crowding by asking the congregation to remain seated at the end of the service for the Clintons to exit.

“Anytime he seemed to be a little sleepy I thought to myself, ‘Well, at least today I can serve the people of the United States by giving their president a bit of a rest with my sermon,”’ Wogaman said.

He attends Mass nearly every week at St. Joseph’s _ a yellow church built in 1841 on land donated by manufacturing magnate Charles I. DuPont _ less than five minutes by motorcade from his lakeside home in Wilmington. Biden sometimes goes on Saturday evening but most often on Sunday mornings, attending with his wife, Jill, or his adult grandchildren, though more frequently coming solo.

TRIED NOT TO GAWK

Biden attended Mass on Friday to mark the anniversary of the deaths of his first wife and daughter, who were killed in a 1972 car crash and are buried at the church cemetery. His son Beau, a former Delaware attorney general who died of brain cancer in 2015, is also buried there. Biden occasionally attends Mass at other churches, such as St. Joseph’s in downtown Wilmington, or St. Edmund near his vacation house in Rehoboth Beach, Del.

On this Saturday evening at St. Joseph’s, the Rev. Glenn Evers didn’t acknowledge the incoming president in the congregation’s midst, instead cautioning anyone worried about “an opportunity to catch” the virus to stay away from the traditionally crowded Christmas Eve afternoon Mass. Most pews were roped off to ensure social distancing, but parishioners nearby could hear Biden softly reciting the Lord’s Prayer.

When Evers asked them to turn and greet their neighbors, they tried not to gawk at the president-elect, who offered warm but quick smiles in return.

Biden’s traveling press pool waited just outside the church grounds, and bombsniffing dogs checked the area long before anyone arrived. Biden entered the church a few minutes late and was the first to exit at the end of the service, keeping disruption to a minimum. He did that so effectively that the only sign he had ever even been there was a Secret Service agent, who lingered to hold the door open for others who filed out a few minutes behind the president-elect.

“We’ve inconvenienced you enough,” the agent said. “It’s the least I can do.”