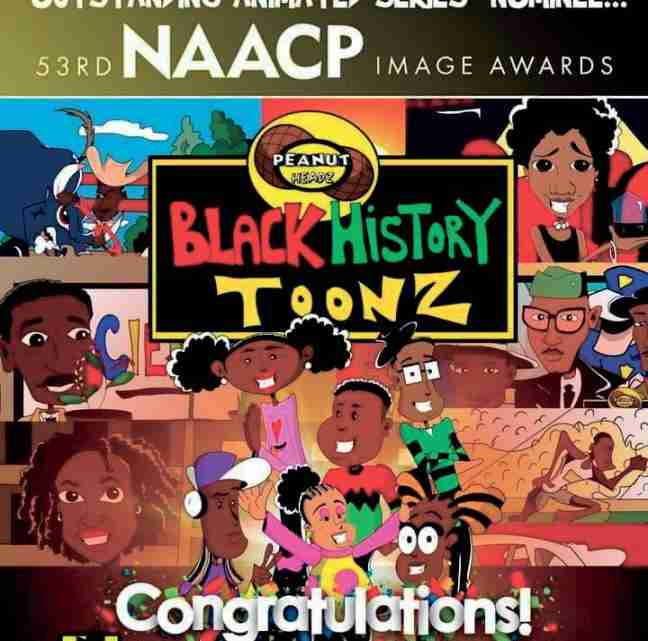 West Palm Beach, Fla. – From a studio based in South Florida and just in time for Black History Month, the animated series “Peanut Headz: Black History Toonz” has been nominated for “Outstanding Animated Series” by the 53rd NAACP Image Awards.

The team whose series focuses on sharing Black stories throughout history now wants your support for “Outstanding Animated Series” by visiting vote.naacpimageawards.net. Created by Haitian-American artist/director Jason “JaFLEU” Fleurant, the series has seen a strong run since its release on the independent BlackOwned streaming platform, kweliTV, which was founded by its CEO, Deshuna Elis Spencer.

After screening on South Florida PBS as an Ofﬁcial Selection for Film-maker Project (2021), “Peanut Headz: Black History Toonz” won Best Web Series at the Los Angeles Motion Picture Festival (2020 & 2021) & Urban Film Festival in 2020, with a nomination in 2021. It was also nominated for Best Art Direction at the international ﬁlm festival Lima Web Fest held in Lima, Peru. The animated shorts have seen success as one of the few USA ﬁlms screened at the historic Kino Muza in Poland, with another about the legendary Jesse Owens being a Kenya International Sports Film Festival ﬁnalist. The award-winning animation studio based out of West Palm Beach remarkably features only JaFLEU as the animator, writer, editor and director.

Episodes feature the voice talent of local and close friends singer Nefertiti Gold (Nesha), model actress KeAsia Jackson (Dyanne), actor Jevon White (Malcolm) who has starred in Nexflix’s “Upstart & Thunderforce,” visual artist Quintinna Hill (Drea) and creative Johana Delhomes (Toya) who all from the very being all believed in the mission quoted by Nina Simone: “We’re gonna do everything from the heart and do it good!”

“Peanut Headz: Black History Toonz” and kweliTV ﬁnd themselves in a category with the Netflix original series “We the People,” produced by former President and First Lady Barack and Michelle Obama, as well as the Youtube original children’s series “Super Sema,” which featured Oscar winner Lupita Nyong’o.

Can the Little Treal Engine that could bring home the win? It’s a victory – and history making – simply to be here. The 53rd NAACP Images Awards will be broadcast on BET, February 26.