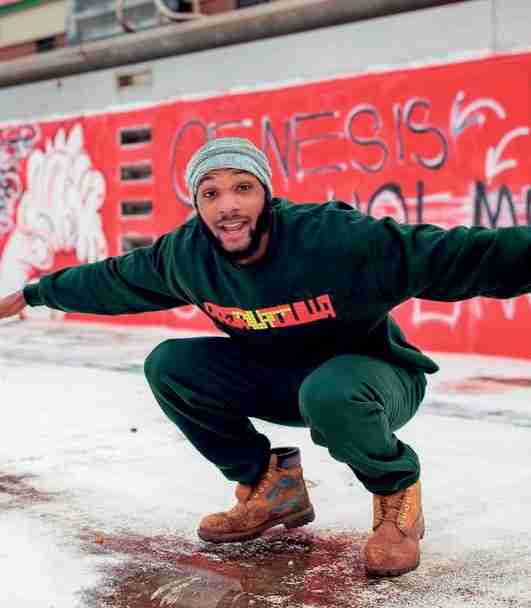 Over 40 years ago, Florida A&M University debuted its eight-lane, 50meter-long Olympic size pool in the heart of campus near Gaither Gymnasium. For the next 25 years it was considered a gem where swimming classes, competitive meets and summer programs were held.

But in 2007, the pool was closed, for reasons including structural damage and no longer meeting NCAA regulations.

After five years without a pool, FAMU renovated its other six-lane pool in 2013. This week, the university began tearing down the Olympic size pool’s surrounding structures a decision Okoli, a junior electronic engineering technology student and a lifeguard at FAMU’s aquatic center, finds frustrating.

Okoli sees the removal of the old pool as a loss to the university; the Olympic sized pool was once an asset to community swimmers.

Okoli’s dual passions for art and swimming began to align in November when he would walk from his apartment on Old Bainbridge Road, with a bucket of paint in his hand, to the abandoned pool across the street from the Lawson Center.

`I WANTED FAMU TO REMEMBER’

Because he is an aquatics employee, Okoli had access to the old pool. And he took advantage of the open space as his canvas. After dark, he painted one side of the pool wall red and centered his art on two names painted in black.

“I didn’t want the painting to be perfect,” said Okoli, 21. “I wanted them to resemble how I felt when I was creating the mural.”

One of the names Okoli included in his panels is James Brock, a white motel owner who poured acid in a pool full of Black swimmers in St. Augustine during a swim-in protest in 1964; no one was hurt. The other is Genesis Holmes, a 13-year-old Black boy who drowned in a pond in Hollywood, North Carolina in 2014.

Okoli says he wanted to remind people about the trauma the Black community has faced in the past and continues to struggle with as it relates to swimming.

“In a sense, I wanted to make FAMU feel bad for tearing down the pool,” Okoli said. “I wanted FAMU to remember the reasons why this pool is needed.”

Okoli wants the pool to be reopened and put back into use. But that’s unlikely.

Jorge Olaves, director of FAMU’s aquatic center and instructor in the health, physical education and recreation department, says even though the pool has been closed since spring 2007, the staff still used the locker rooms, lifeguard office and an aquatics lab surrounding the structure until last December. That’s when they were asked to move out ahead of the demolition.

“Okoli and a lot of my other staff didn’t like that the pool will soon be torn down,” Olaves told the Democrat. “They preferred that it be fixed instead.”

But they never took those concerns to the university, he added.

William E. Hudson, Jr., vice president of student affairs at FAMU, wasn’t aware of Okoli’s artistic display. But soon the art will be a thing of the past.

Hudson told the Democrat the pool demolition will begin in March to create more parking spaces for students, faculty and staff.

`A FORM OF EXPRESSION’

Growing up in a strict household in Lagos, Nigeria, Okoli was never allowed to show his expressive side.

He developed his interest in art at an early age but was discouraged to pursue it by his parents. His father is a lawyer and his mother is an executive director at a bank.

“Growing up in Nigeria, there is a cultural difference,” Okoli said. “Creating art is looked down on, so I would always draw in secret.” In his teenage years, Okoli found himself in a lot of trouble.

In his senior year of high school, he met a group of artists that encouraged him to stop his rebellious behavior and express himself through art instead. But trouble found him again: He was later expelled from high school for smoking marijuana.

It was at the encouragement of his uncle Okenwa Okoli, a professor and chair of the Department of Industrial & Manufacturing Engineering at the FAMU-FSU College of Engineering that he moved to Tallahassee.

It was here that Okoli began to take his artistic ability seriously, but it wasn’t until the beginning of the covid pandemic that he regularly exercised his skills on clothing, canvases, and walls.

Okoli says this mural is the first of many. He hopes to finish painting the other side of the historic pool walls before the scheduled construction begins.

“I think the artwork is cool,” Okoli said. “It takes a form of expression on its own.”