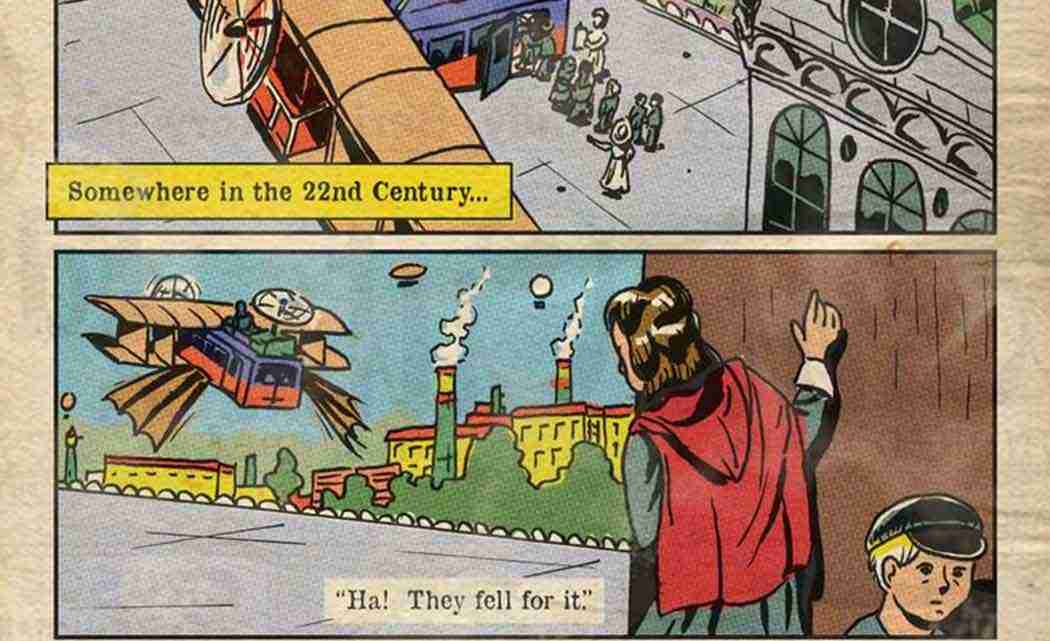 CORVALLIS, Ore. (AP) _ Imagine a world where every prediction from the 19th century came true _ people fly to work on winged cars, monarchies are the dominant form of government _ and mix it with mummies, enchanted necklaces and a cantankerous ghost.

It’s not your typical comic book story (no superheroes leaping tall buildings in a single bound), and Corvallis’ Andy Purviance isn’t your typical comic book writer and artist. Every Tuesday and Thursday, Purviance spends 20 to 30 hours of his free time at Imagine Coffee _ writing, drawing, inking and digitally coloring the latest pages from his alternative webcomic “I, Mummy.”

“It’s definitely different,” the 42-year-old said recently while taking a break from inking his latest page. “When you have your own universe, you can do what you want. And I think for the reader, it’s more interesting because you never know where it’s going. You know Superman is going to succeed at the end of the day, and if he dies, he’ll come back a few issues later. So I write what I want to see. I figured if I enjoyed it, then other people would probably enjoy it, too.”

Purviance said the comic came together after a chance encounter with the book “The Mummy!” by Jane C. Louden. Purviance said he became enamored with the ideas in the 1827 novel about an Egyptian mummy brought back to life in the year 2126.

“Like `Frankenstein’ is a record of its time, (‘The Mummy!’) was very much in its own time, too,” Purviance said. “It’s like steampunk because it has an alternate history. But it’s not exactly steampunk, and I like this more because it’s what people really thought would happen _ and it’s funny to see how different it is from how it actually happened.”

For those who don’t know, steampunk is the name of a sub-genre of science fiction and fantasy that blends high tech with style elements from the Victorian era of the 19th century. For instance, a computer might feature fancy bronze embellishments.

Purviance says he draws inspiration regularly from the out-of-this-world predictions made with the public domain postcards “France in the year 2000” by Villemard and Jean-Marc Côté. The postcards illustrate fanciful events, such as people playing croquet in the ocean or teachers feeding textbooks to their students through a machine. But it’s not just the technology that Purviance carried over.

“It’s fascinating insight into a period when monarchies were great, and this fly-by-night democracy thing was going to blow over,” Purviance said. “And I try to play that up in (the comic), too, where the bad guys are the ones pushing democracy, and the good guys are the people supporting the monarchy.”

The webcomic plays off of that contrast of the world he’s created and the world his readers inhabit. The characters even speak in 19th century vernacular. For instance, when one character tells another that they need to collect their things and leave in the morning, it comes out as “Hmm . let us snaffle provisions this night and set out in the morn.”

“It’s very tongue-in-cheek,” Purviance said. “I can’t take a scene too seriously for too long, so I’ll just throw in a gag every now and then to lighten things up.”

While the book is hand-drawn and inked, Purviance uses digital artistry to add dialogue balloons, create a particular color or lend a vintage look to the imagery.

Purviance, who makes his living as a project manager at Corvallis’ Eduworks, insists there is no money in the book, but it’s an addictive hobby, and Purviance and his loyal readers can’t get enough.

Hundreds of regular readers check out the latest pages of the book when they’re released, and often they provide feedback in comments below the pages themselves. The constant feedback allows for the webcomic to have an interactive element.

“There’s nothing like having people read your comic as you’re making it. The online community is wonderful,” Purviance said. “If you put it out there after you’re done, there’s no communication and no feedback and it loses something. Sometimes (the feedback) is harsh, but it really works.”

Purviance finished the 92-page first volume of the webcomic last year, and he is in the middle of the second part. It’s a tremendous undertaking, he said, and he has advice for those new to creating webcomics:

“Start off with a short story; even a small project can end up taking a lot longer than you thought. I kind of started out thinking I could make it up as I went along. I could just do it and think of something interesting to happen. That lasted three pages before I realized that wasn’t a good idea.”

Purviance said he plans to finish Volume II this year and will likely begin Volume III next year.

“I had kind of mucked with things a bit after making the first one, and I think now I’m going to have to do a third one, or people are going to be mad at me,” Purviance said.

As for what’s next?

“I’m still having fun with it, so I might try to do another comic,” he said. “But I think the next story I do is going to be a lot shorter.”

To read “I, Mummy,” or to learn more about Purviance’s work, see i-mummy.com.