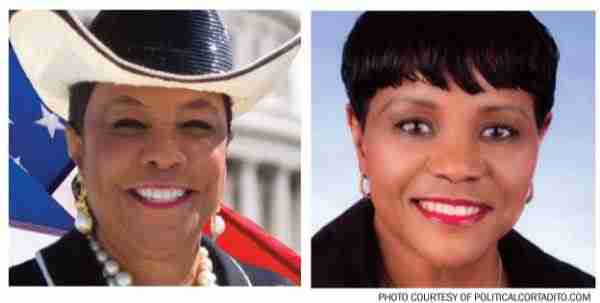 Now Wilson is being challenged by Edmonson this year in the Democratic primary race in Florida’s 24th District, saying Wilson has failed her constituents and the needs of the district and state.

Edmonson recently held a press conference at the Village of El Portal, where she launched her political career in the 1990s as mayor.

In 2005, she won an election to replace Barbara Carey Shula on the commission, where she served 15 years before she was term-limited in 2020.

She served as chairwoman on the commission the last two years of her ﬁnal term.

Edmonson said it was a difﬁcult decision to challenge Wilson, but changes are needed to enhance the areas in District 24, which covers Miami-Dade and Broward Counties.

About 60 percent of the voters are registered Democrats, and 41.8 percent of residents are Black, 43.9 percent are Hispanics and 21.1 percent are whites, according to the 2020 Census report.

“I take no pleasure in challenging her, as we agree on most issues,” Edmonson said in front of the onestory home used for Village Hall. “However, neglecting to do the job that voters elected her to do is simply unacceptable. Our residents deserve a real voice in Congress, and someone willing to show up for work and ﬁght for Florida families.”

The race pits Wilson, 79, against Edmonson, 69, two veteran political ﬁgures ﬁghting for issues in the Black community from Washington D.C. and when Edmonson served on the county commission.

The race is a big step for Edmonson, perhaps following the path of her former colleague, former Miami-Dade County Mayor Carlos Gimenez, who also was termed out in 2020 and won a seat in Congress.

But Edmonson is challenging Wilson, a sixth term Congresswoman and a prominent member who serves as chair of subcommittees on labor and education.

Wilson got the FBI and the U.S. Department of Justice to investigate bomb threats on the campuses of HBCUs in February that led to several suspects being questioned.

Also in February, Wilson presented a $18 billion statewide check as part of President Joe Biden’s Infrastructure Investment and Jobs Act to elected ofﬁcials from Miami-Dade County, the City of Miami, Opa-locka, Miami Gardens, Homestead, and the Village of El Portal.

The money is their share of the infrastructure money.

And Wilson is still being praised for starting her biggest project, the 5000 Role Models, a program pairing youths with adult mentors to ensure they achieve their personal and career goals.

But Edmonson wasn’t impressed with Wilson’s record and decided to challenge her.

Edmonson said Wilson has been a no-show congressional member who leads the House in exercising the pandemic-era option to vote by proxy instead of appearing in the chambers personally. A tally by the pro-Republican Ripon Society lists Wilson as the top user of proxy votes in 2021, exercising that option 438 times last year.

Taking a shot at Wilson’s signature fashionable trademark of colorful hats, Edmonson said constituents are tired of sending a fashion show to Washington D.C. to represent them with little results. Edmonson is a longshot to beat Wilson but some political insiders suggested she is getting her name out there to make a stronger run when Wilson retires.

Edmonson is perhaps looking for a head start amid rumors that other candidates might be seeking Wilson’s seat when she retires including State Senator Shervin Jones and Miami-Dade County Vice Chairman Oliver Gilbert.

Jones, a Democrat, declined to say if running for Congress is in his future, but said he’s a big supporter of Wilson, who was his elementary school principal.

“She is very vigilant in this moment, and we need her leadership in this time,” said Jones, praising her recent work with the Biden administration to bring federal dollars into the district.

Kevin Harris, a resident of Miami Gardens, is also challenging Wilson in the Democratic primary.

Christine Olivo from Hollywood initially challenged Wilson but plans to reﬁle for another district once the ﬁnal redistricting map is approved by the State Legislation.

Patricia Gonzalez of Broward County is the only candidate in the Republican primary for Congressional District 24.