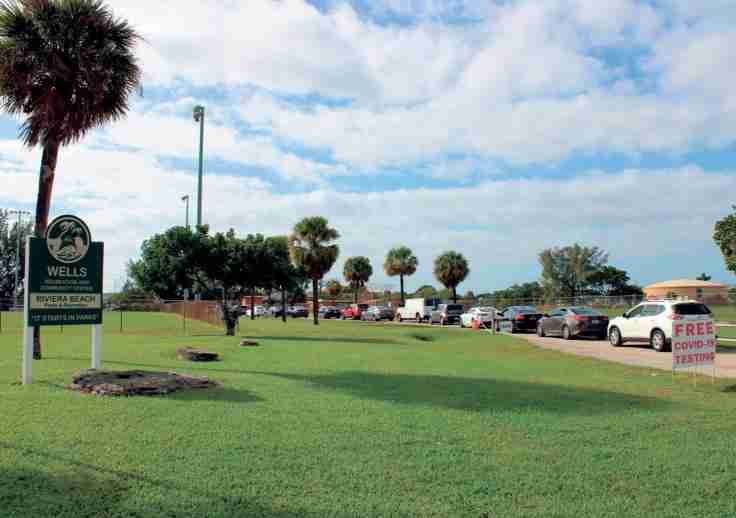 ATLANTA (AP) – Some of Georgia’s largest school districts will start the new year virtually amid the state’s surge in COVID-19 cases.

Fulton County and Dekalb County schools said Friday students will learn remotely when they resume classes then return for in-person instruction on Jan. 10. Clayton County Public Schools and Rockdale County Public Schools previously announced the same plan. All four districts are in the Atlanta area. Clayton Superintendent Morcease Beasley said the additional time away from the classroom will allow students and employees who test positive for the virus to complete recommended quarantine periods.

“As we continue to monitor the surge in COVID-19 cases within our county, we understand that our schools and ofﬁces are microcosms of our respective communities,” Beasley said in a statement. “We have to act with caution and encourage families to participate in the vaccination and testing opportunities available to ensure we can have school with minimal disruptions to the learning process.”

MINNEAPOLIS (AP) – A member of the jury that convicted Minnesota police ofﬁcer Kim Potter of manslaughter in the killing of Daunte Wright says jurors felt she made an honest mistake when she drew her ﬁrearm instead of her stun gun, but that she was still responsible for his death.

The juror spoke with KARE-TV reporter Lou Raguse on the condition of anonymity due to what the station described as the “public animosity” surrounding the case. The juror said no one felt Potter was a racist or meant to kill Wright, but that doesn’t mean she was above the law.

Potter shot and killed the 20-year-old Wright in April as he tried to drive away from a trafﬁc stop in Brooklyn Center, a Minneapolis suburb.

Potter, a 26-year veteran on the city’s police department, said she meant to use her stun gun on Wright but didn’t realize she had actually drawn and ﬁred her pistol. Wright was Black and the shooting happened as another white ofﬁcer, Derek Chauvin, was standing trial in nearby Minneapolis for the killing of George Floyd. It set off waves of angry protests in Brooklyn Center.

The juror told KARE-TV’s Raguse that jurors didn’t feel Potter lied on the stand and instead felt she was fighting for her life. But the jury generally thought that Potter should have known she was holding a pistol and not a stun gun given her years of police experience. The juror said a turning point in deliberations came when jurors handled Potter’s stun gun and pistol and felt the differences. “The gun was about twice as heavy, and the two weapons had several differences in how they are un-holstered and fired,” the juror said.

WWII VETERAN WHO WAS MEMBER OF ‘BUFFALO SOLDIER’ UNIT DIES

BRADENTON, Fla. (AP) – Steve Lewis, a World War II veteran who was one of the last living members of an all-Black cavalry regiment, died Dec. 29 in Florida. He was 99. Robert Powell, president of the NAACP chapter in Manatee County, Florida, said Lewis had been hospitalized prior to his death but he didn’t know the cause of death. “We lost a legend, a great guy,” Powell said in a phone interview. “I used to love listening to his stories.”

After entering the U.S. Army in 1943, Lewis was initially assigned to the 9th Cavalry Regiment at Fort Clark, Texas, where he was told to corral and get a horse and issued a saddle, bridle, horse blankets and stirrups, according to the Bradenton Herald. The unit had gained fame after the Civil War by patrolling the American frontier, and its members were known as “Buffalo Soldiers.”

The Army deactivated the 9th Cavalry Regiment in 1944, and reassigned Lewis to the U.S. Army Transportation Corps in Casablanca, where he helped supply war materials to the front in Italy, France, and Germany.

After the war, Lewis, a Florida native, earned a degree in agriculture and taught for 30 years in the Palmetto, Florida, area.

Lewis is survived by a daughter, according to the Bradenton Herald.

LAST PARENT OF A CHILD KILLED IN 1963 CHURCH BOMBING DIES

BIRMINGHAM, Ala. (AP) – Maxine McNair, the last living parent of any of the four Black girls killed in a 1963 Alabama church bombing, died Sunday. She was 93. McNair’s family announced her death in a press release. A cause of death was not given.

Three members of the Ku Klux Klan were eventually convicted in the case, the ﬁrst in 1977 and two more in the early 2000s.

Maxine McNair worked as a teacher for over three decades in Birmingham public schools. Her daughter, Lisa McNair, said she changed many lives through education and left a lasting legacy through the students she touched.

“Mrs. McNair was an amazing wife and mother and as a teacher of 33 years in the Birmingham public school system imparted knowledge in the lives of hundreds. We are going to miss her laughter and her humor. The family would appreciate all of your thoughts and prayers,” the family’s statement said.

Maxine McNair’s husband, Chris McNair, died in 2019 at the age of 93. He was one of the ﬁrst Black members of the Alabama legislature since Reconstruction, and a Jefferson County commissioner.

In 2013, Maxine McNair attended an Oval Ofﬁce ceremony in which President Barack Obama awarded the four girls the Congressional Gold Medal, one of the country’s highest civilian honors.

Funeral arrangements for a celebration of Maxine McNair’s life are pending.

As district attorney, Bragg inherited an investigation into Trump and his business practices from his predecessor, Cyrus Vance Jr., who declined to seek reelection last year after 12 years in the high-proﬁle job.

After weeks of speculation about whether Vance would close his tenure with a bang by indicting Trump, the former D.A. has passed that decision to Bragg, a 48-year-old civil rights lawyer and former federal prosecutor who was sworn in at a private ceremony, in part because of COVID-19 concerns.

Bragg told CNN last month that he’ll be directly involved in the Trump matter. He also said he has asked the two veteran prosecutors who led the case under Vance – general counsel Carey Dunne and former maﬁa prosecutor Mark Pomerantz – to stay on and see it through.

“This is obviously a consequential case, one that merits the attention of the D.A. personally,” Bragg told CNN. The investigation resulted in charges last summer against Trump’s company, the Trump Organization, and its longtime ﬁnance chief, Allen Weisselberg. In the fall, Vance convened a new grand jury to hear evidence in the case.

Trump himself remains under investigation by the ofﬁce after Vance led a multiyear ﬁght to get access to the Republican’s tax records.

As a top deputy to New York’s attorney general in 2018, Bragg helped oversee a lawsuit that led to the closure of Trump’s charitable foundation over allegations that he used the nonproﬁt to further his political and business interests.

BRIGHTON, N.Y. (AP) – An upstate New York school district is defending its decision to drop the holiday classic “Jingle Bells” over the song’s history. Brighton Central School District Superintendent Kevin McGowan wrote in a message on the Rochester-area district’s website that it was appropriate to discontinue using the song at the Council Rock Primary School considering research has shown it may initially been performed by white actors in blackface in the 19th century.

McGowan said removing the song wasn’t an example of cancel culture or meant to push any agenda, but instead was a “simple, thoughtful curricular decision,” the Rochester Democrat and Chronicle reported. The school’s students are in kindergarten through second grade.

“It may seem silly to some, but the fact that `Jingle Bells’ was ﬁrst performed in minstrel shows where white actors performed in blackface does actually matter when it comes to questions of what we use as material in school,” McGowan wrote. “I’m glad that our staff paused when learning of this, reflected, and decided to use different material to accomplish the same objective in class.”

Rush, 75, conﬁrmed his plans to The Chicago Sun-Times, saying Monday he ﬁnalized his decision weeks ago. The Democrat, known for anti-violence activism and racial equity work, was ﬁrst elected to Congress in 1992. He holds the distinction of being the only politician to win a race against Barack Obama, easily defeating the then-state senator in a 2000 congressional primary.

Rush, an ordained minister who preaches on Chicago’s South Side, said he would remain in the public eye and continue ministry after leaving Congress.

WOMAN ARRESTED ON ARSON CHARGE IN FIRE AT ISLAMIC CENTER

ALBUQURQUE, N.M. (AP) – Albuquerque police have arrested a woman sought on a warrant charging her with arson in a Nov. 29 ﬁre at the Islamic Center of New Mexico. The arrest warrant for Isela Camarena was issued Monday and she was arrested and booked into jail Wednesday. According to court records, she’s charged with arson involving damage over $2,500.

Local media reported that security video showed a woman setting a trash can’s contents on ﬁre, then pouring the burning trash on the ground and spread the burning material. According to court documents, that person’s actions threatened to set the building on ﬁre.

DOVER, N.H. (AP) – A New Hampshire woman violated the state’s civil rights law by calling a Black child by a racial slur and threatening to kneel on his neck, a court ruled Wednesday. Kristina Graper, 51, of Dover, was accused of threatening the 9-year-old in May after he accidentally broke her son’s toy at a local park. She was prosecuted by the attorney general’s Civil Rights Unit in Strafford County Superior Court, which concluded that her conduct was motivated by the victim’s race and was intended to terrorize or coerce him.

Graper, whose race was not mentioned in the complaint, has been prohibited from contacting the boy or his family or coming within 250 feet of them. She also was given a $2,500 civil penalty, with all but $500 suspended if she complies.

Next post ‘The Shooter,’ Celtics’ Hall of Famer Sam Jones, at 88

Previous post Not ready for an electric? 4 ways to go green