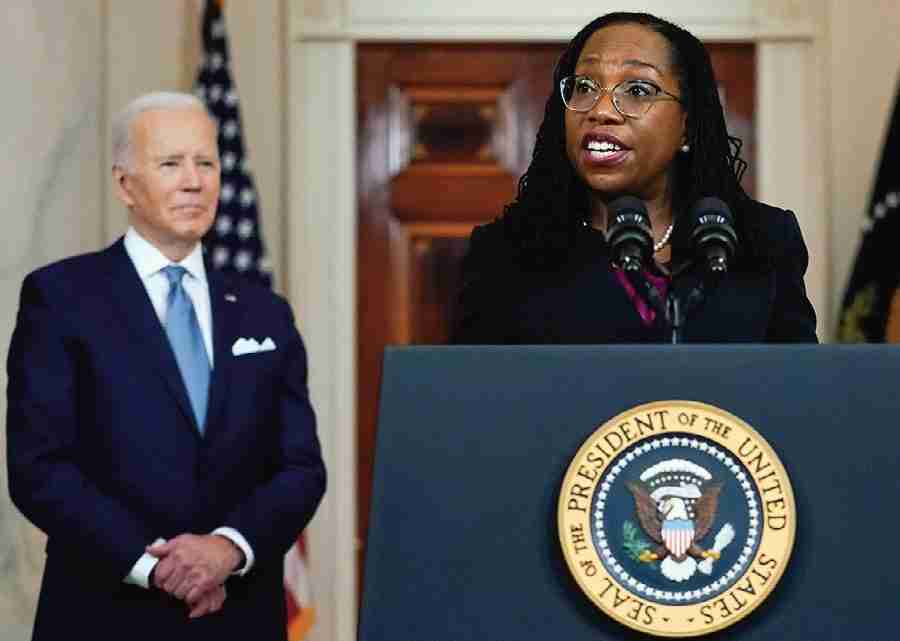 Washington (AP) – President Joe Biden’s nomination of Judge Ketanji Brown Jackson to the Supreme Court has launched what Democrats hope will be a quick, bipartisan conﬁrmation process for the court’s ﬁrst Black woman.

Jackson would replace Justice Stephen Breyer, who has said he will retire this summer at the end of the court’s current session. But Democrats want to conﬁrm Jackson months or weeks before that, ensuring she is the justice-in-waiting, in case the 50-50 balance of the Senate shifts in any way. Democrats control the Senate because Vice President Kamala Harris has the tie-breaking vote.

As they ﬁgure out the timeline ahead, Democrats are looking to the 2020 conﬁrmation of Justice Amy Coney Barrett as a new standard. While other nominees had taken several months, Barrett was conﬁrmed a little more than ﬁve weeks after the death of Justice Ruth Bader Ginsburg, just ahead of the presidential election that year. Jackson’s conﬁrmation will likely take longer than that, but Senate Judiciary Committee Chairman Dick Durbin said Friday the panel will start the process “immediately.” The last three Supreme Court conﬁrmations, all nominees chosen by thenPresident Donald Trump, were intense partisan battles that deeply divided the Senate. Democrats say they want to bring down the temperature and conﬁrm Jackson with votes from both Republicans and Democrats. But it’s unclear if they will be able to do that.

When announcing Jackson’s nomination on Friday, Biden noted that he had met with Durbin and the top Republican on the Judiciary panel, Iowa Sen. Chuck Grassley, in recent weeks. “My hope is that they will move promptly,” Biden said. “And I know they’ll move fairly.” A look at Jackson’s nomination, and the next steps in the Senate:

WHO IS KETANJI BROWN JACKSON?

Jackson was nominated by President Biden in 2021 to serve on the U.S. Court of Appeals for the District of Columbia Circuit and conﬁrmed by the Senate last June. She previously sat on the D.C. district court, nominated by former President Barack Obama and conﬁrmed in 2013. She worked as a law clerk for Breyer early in her career and served on the U.S. Sentencing Commission, the agency that develops federal sentencing policy. Ketanji Brown Jackson was born and raised in South Florida.