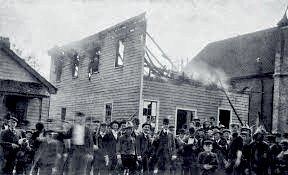 MIAMI – All that remains of The Daily Record is a small piece of land. A parking lot adjacent to a church. Many citizens of Wilmington, NC who were born and raised in the town do not know the importance of the hallow square piece of land. They have no idea that the land is significant in American history. Those who are aware of what happened on the land that once held the offices and printing press of the only African American daily newspaper in the country are sequestered within two camps: those who choose to remain silent and those who cannot remain silent any longer.

The land where Wilmington resident Alex Manly edited and published The Daily Record was the site of a tragedy whose repercussions are generational in scope. In a scathing editorial he tore at the hypocrisy of the myth of White supremacy, the raping of African American women by White men, and the consensual relationships between White women and African American men wrongly defined as rape and the catalyst of the heinous crime of lynching. Manly courageously gave voice to what all African Americans across the South were whispering. Scholars note that Manly’s editorial would add fuel to the events that subsequently would change Wilmington. What happened on Nov. 10, 1898, was the blueprint for the violent, systemic Jim Crow racism that would establish the relationship between African Americans and White Americans for at least another hundred years in the South. On that date, the only successful coup d’état occurred on American soil: the Insurrection of 1898.

What happened in Wilmington, more than 123 years ago this week is the playbook for modern day racism and the events that took place on Jan. 6, 2021. The Insurrection on Capitol Hill has left nine dead and many traumatized by the things they endured on that day. As city ofﬁcials, historians, and descendants converge on Wilmington this week, the discussion will not only be a remembrance for the 600plus souls lost during the massacre, but the need for reconciliation that comes from acknowledging that some sort of restitution or reparations should be dispersed. In 2000, a 1898 Wilmington Race Riot Commission was established “to develop a historical record of the event and to assess the economic impact of the riot on African Americans locally and across the region and state.” The commission issued its Final Report in 2005 and from public hearings, interviews, and scholarly analysis it was ascertained that a group of prominent White men, former Confederate ofﬁcers and politicians, business owners and newspaper publishers, organized and planned to remove elected Republican ofﬁcials from state and local seats of political stature in North Carolina. Once noted in history books as a “race riot,” the coup d’état that occurred on the morning of Nov. 10 was not a case of African American Wilmingtonians “disturbing the peace” and running amuck in the streets. It was not a “race riot” precipitated by a “corrupt and ﬁnancially devastating rule by Republicans” with a racially mixed majority.

Rather the day was about the bitterness and anger that White North Carolinians felt at the fall of the Confederacy at the end of the Civil War. The conclusion of the Civil War brought the official end of that “peculiar institution” known as slavery. The legislative institution of slavery was responsible for the agricultural success of the South on an international scale. Great Britain, France, and Germany were major buyers of American cotton, sugar, and tobacco. African American slaves provided the necessary labor to make these agricultural resources profitable.

Flash forward almost 20 years from the end of the Civil War to 1898 North Carolina and other southern states. African Americans were becoming prosperous taxpaying citizens with jobs in various sectors of society. African Americans were business owners, purveyors of higher education that helped create a burgeoning middle class and produced Manly and other professionals of color like attorney William Everett Henderson. Wilmington 1898 was a predominately African American city that was a microcosm of what it could be like across the South. White North Carolinians and African American North Carolinians sharing public spaces and political ambition. Not yet a utopia, but a glimpse at what a country could look like without White supremacy’s darkened influence. However, insurrectionists masquerading as local and state “heroes,” such as Paul Waddell, part of the “Secret Nine,” a group of White supremacists, were determined to put African Americans back in their subservient or submissive place.

Alongside Waddell stood Charles Ayock, Furnifold Simmons, and the purveyor of hate propaganda media, the publisher of The News and Observer, Josephus Daniels. Rounding more than 2,000 Wilmington White male residents which featured the unsavory red shirts and the militia, White supremacy rang out on the streets on Nov. 10, 1898.

Last week the New Hanover County Board of Commissioners declared the month of November as 1898 Commemoration Month. “It is great when you acknowledge your history,” Commissioner Jonathan Barfield said at the board meeting. “Having grown up here and gone (to) Blount Elementary, Snipes and New Hanover High School, I never heard about this 1898 coup d’etat. It’s amazing how it was just eliminated from public education all those years.” The Riot Commission’s Final Report outlined the horrific events, stating that what “happened in November of 1898 was a breakdown in the rule of law. Alfred Moore Waddell and the leaders that orchestrated violence should be recorded in history for what they really were, felons! The wanton destruction of property and the indiscriminate murder of innocent people cannot be justified even in the historical context of 1898.”

The call for reparations is a difficult subject for the White citizens and officials of Wilmington. The descendants of the African Americans who were murdered, displaced, and forced from their homes, properties and businesses have long held the belief that some sort of monetary compensation is due. This is a justifiable perspective given that today Wilmington happens to be a financially booming city thanks to Hollywood. Incentives and tax breaks have made Wilmington a darling of the film industry. “Everything we’re hearing is that Wilmington is the place to be,” said Wilmington Regional Film Commission director Johnny Griffin. Reports reveal that North Carolina, and specifically Wilmington, are breaking records in the film industry. Wilmington grossed $409M during the first six months of 2021 and it is projected that by the end of the year will pocket $750M. With 12 films recently wrapped and an additional eight in phases of pre- and production, and companies such as Netflix, Hallmark, and Screen Gems doing massive business in Wilmington, the monetary windfall will prove substantial in the next couple of years.

Perhaps the discussion of reparations should be front and center for the descendants of The Daily Record’s Manly, and William Everett Henderson who fled for their lives with their families on Nov10, 1898. Henderson, who fled to Indianapolis, Ind., would go on to become a successful attorney. Manly helped craft civil rights legislation in the office of North Carlina Congressman George Henry White and later settled in Philadelphia where he founded an African American bank and became a painter.

But his heart was never far from his journalist past in Wilmington. Manly would become a member of the Afro American Newspaper Council, but he never fully recovered his journalistic endeavors. “Unfortunately, my grandfather never discussed that anymore, what really happened because he probably went to his grave thinking that he was a perpetuator of what happened there, which he wasn’t,” opined Dr. Lewin Manly, Jr., his grandson.