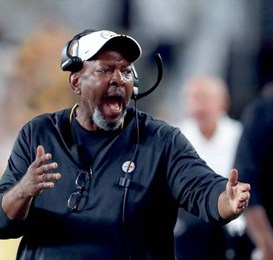 PITTSBURGH (AP) – Darryl Drake, the Pittsburgh Steelers wide receivers who spent more than 30 years molding players at the position at the college and professional level, has died. He was 62.

“Darryl had such an impact on the players he coached and everyone he worked with throughout his entire career,” Steelers president Art Rooney II said. “He was a passionate coach and had a tremendous spirit toward life, his family, his faith and the game of football.”

Drake, a native of Louisville, Ky., played collegiately at Western Kentucky. He spent one season in the Canadian Football League and participated in a pair of NFL training camps before returning to Western Kentucky to pursue a master’s degree. He went into coaching as a graduate assistant at Western Kentucky in 1983, the beginning of a career that included stops in the college ranks at Georgia, Baylor and Texas.

“He had a tremendous impact on those who he coached and those who were fortunate to call him a teammate,” WKU athletic director Todd Stewart said. “WKU Football was better because of our association with him.”

Drake reached the NFL as a receivers coach in 2004 with the Chicago Bears. He moved on to the same position with the Arizona Cardinals in 2013 before joining Steelers head coach Mike Tomlin’s staff in 2018. Drake’s pupils through the years include Cardinals star Larry Fitzgerald, longtime NFL wide receiver Brandon Marshall and Antonio Brown, who played for Drake in 2018 before being traded to Oakland last spring.

“I’m heartbroken for anyone who had the privilege to know Darryl,” Fitzgerald tweeted. “As a man, a coach, a husband, and a father, he was as good as they come.”

The Steelers brought in Drake last summer to work with a young receiving corps that included JuJu Smith-Schuster and James Washington.

“Darryl was a close friend and had a tremendous impact on my coaching career,” Tomlin said. “He was an amazing husband, father and grandfather, and it is difficult to put into words the grief our entire team is going through right now. Darryl loved the game of football and every player he ever coached. We will use our faith to guide us and help his family throughout the difficult time.”

Cleveland Browns head coach Freddie Kitchens, who coached alongside Drake in Arizona, called Drake “a really good coach and an even better friend.”

“The NFL coaching community lost a really good person that always took a great personal interest in the lives of the players he coached and the staff he worked with,”

Carolina Panthers tight end Greg Olsen, who played under Drake in Chicago, tweeted that Drake “had a huge impact on me as a young player. His players loved him.”

Drake is survived by his wife, Sheila, daughters Shanice, Felisha and Marian as well as two grandchildren.

Pittsburgh cancelled practices at Saint Vincent College on both Sunday and Monday after announcing Drake’s death.