Headstone donated for grave of former slave in Alabama 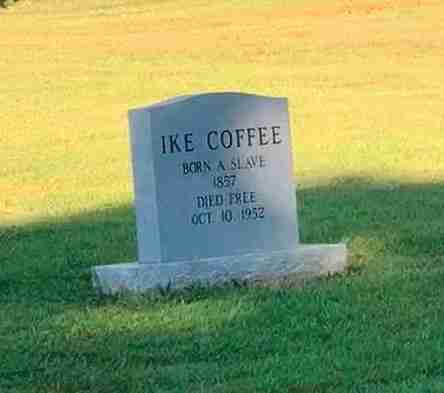 Florence, Ala. (AP) – Bill Simpson never knew Ike Coffee, but he heard numerous stories about him from when his mother and aunts were growing up.

Simpson said Coffee lived in a small apartment attached to the James Stewart family home. He looked after their children and often other children in the neighborhood.

“He was really engaging with them,” Simpson said. “He really showed them a lot of love. They always talked about him in such glowing, loving tones.” Coffee’s obituary stated he was formerly enslaved and had served as a house servant in the Stewart home for the past 65 years, “helping raise all 10 of the Stewart children.” He was 95 years old when he died in about 70 years ago.

The obit stated he had no survivors. On Saturday, several people gathered at Coffee’s grave in Florence City Cemetery for a brief memorial service. Simpson, his cousin, Sabine Brown, and Chubby Stewart arranged for a new headstone to be placed at Coffee’s grave.

“It was a nice, quiet, pleasant service,” Simpson said. “A lot of love was shown by everybody that was there.” Simpson said he does not know the date Coffee moved in with the Stewart family, or how long he lived with them. Chubby Stewart said Coffee was a driver with Stewart Brothers Transfer, but had to retire due to his eyesight.

Simpson said census records had Coffee listed as a driver and servant.

(Coffee) “was sort of rescued” by Chubby Stewart’s grandfather, James Stewart, according to Simpson.

The story, as told to Simpson by Chubby Stewart, was that James Stewart was riding his horse toward town on Cloverdale Road and gave Ike Coffee a ride into town.

What isn’t clear is how old Coffee was when this happened, Simpson said, adding that Coffee died when Simpson was about 2 years old.

He said he has a vague memory of a Black man in an apartment, but admitted it could have been generated by the stories he had heard about Coffee. Simpson’s daughter, Tammy Hendrix, said her father had asked her to have the headstone made and placed at Coffee’s grave after he died.

Hendrix said she and her sisters convinced him to do it while he was living.

“It’s just a very nice thing he’s done,” Hendrix said. “There are a lot of slaves and veterans around here who were buried without headstones. He did this for a man who went through a lot in his life.”

Simpson said he began thinking about Coffee about 20 years ago when he developed an interest in genealogy. He came across Coffee’s name, then began digging deeper and learned Coffee was buried in Florence Cemetery. He located the grave and discovered it lacked a marker.

“At one time, at least, there was some sort of marker,” Simpson said.

“By the time I got there, it was gone. I felt like he was such a loved human being, that he deserved to be recognized for that.” He said the headstone was installed last year, but the memorial was postponed due to the COVID-19 pandemic.