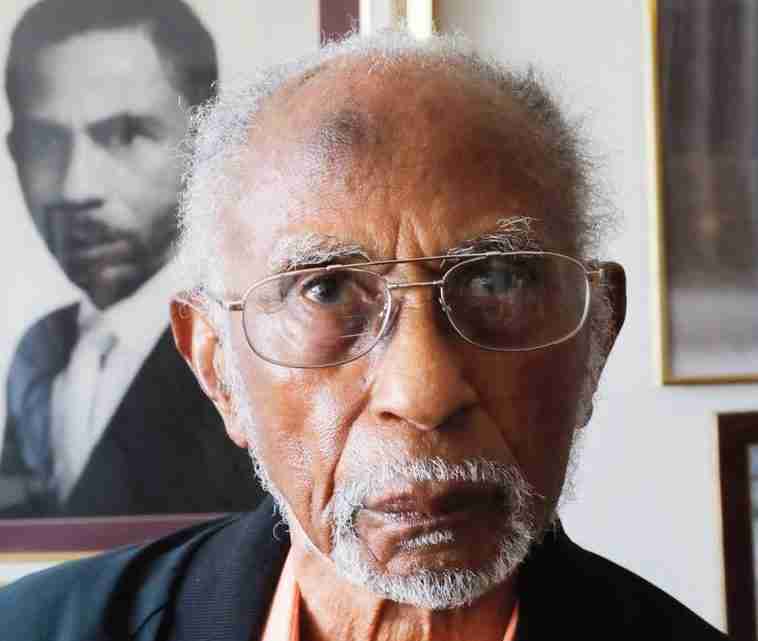 Baton Rouge, La. (AP) – Johnnie A. Jones Sr., a Louisiana civil rights attorney and World War II veteran who was wounded during the D-Day invasion of Normandy, has died. Jones was 102 years old.

Jones was born Nov. 30, 1919 in Laurel Hill, La., and raised on Rosemound Plantation by his parents, who farmed 73 acres of land but insisted that their son get an education. He graduated from Southern University and then was drafted in 1942. He became the Army’s ﬁrst African American warrant ofﬁcer. He was assigned to a unit responsible for unloading equipment and supplies onto Normandy.

During the June 6, 1944 invasion – as Jones came ashore on Omaha Beach – he came under ﬁre from a German sniper. Jones grabbed his weapon and returned ﬁre, a memory that haunted him all his life.

“I still see him, I see him every night,” Jones told The Associated Press in a 2019 interview.

Jones almost never made it to the beachhead that day. His ship hit a mine, and he was blown from the second deck to the ﬁrst. The explosion, “blew me sky high into the air,” Jones was quoted as saying in a Department of Veterans Affairs interview. Later, Jones got hit with shrapnel when he didn’t hit the ground fast enough during a bomb attack.

By the end of World War II, more than a million African Americans were in uniform including the famed Tuskegee Airmen and the 761st Tank Battalion. But they returned from the war only to encounter discrimination back home.

Jones told the AP in 2019 that after returning from Europe, he had to move to the back of a bus ﬁlled with fellow soldiers as it crossed the Mason-Dixon line separating North from South.

“I couldn’t sit with the soldiers I had been on the battleﬁeld with. I had to go to the back of the bus,” said Jones. Moreover, while traveling to New Orleans to get shrapnel removed from his neck, Jones was pulled over by a white police ofﬁcer and roughed up.

Such events served as a call to action, to ﬁght racism. He obtained a law degree and was recruited in 1953 to help organize a bus boycott in Baton Rouge and defend the participants. The Rev. Dr. Martin Luther King used that event to plan his larger bus boycott in Montgomery, Ala., several years later.

The French government in 2020 presented Jones with the Legion of Honor award for his World War II service.

It took decades for Jones’ sacrifice and courage during World War II to be recognized. In 2021 – at age 101 – he finally received a Purple Heart, which is awarded to U.S. service members killed or wounded in action.

The Louisiana Digital Library has an interview with Jones on its website.