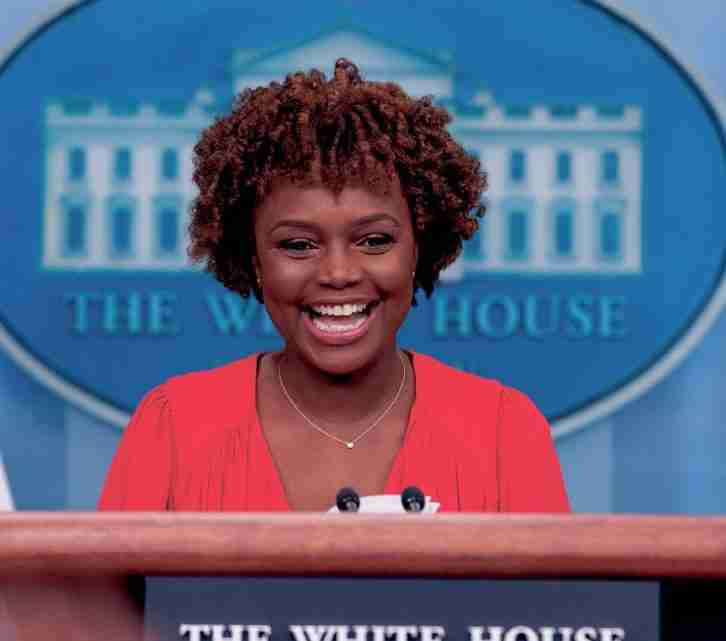 Washington (AP) – Karine JeanPierre, the new White House press secretary, hopes she can inspire young people to “dream big and dream bigger” now that she has broken a barrier by becoming the ﬁrst Black and gay woman to be chief spokesperson for the president of the United States.

Jean-Pierre reflected Monday on what it means to become one of the most visible members of President Joe Biden’s administration as she spoke about a letter that students at her former elementary school in New York wrote telling her how proud they are of her.

“Representation matters, and not just for girls, but also for boys,” Jean-Pierre told reporters during the ﬁrst of what likely will be hundreds of daily press brieﬁngs she will hold.

“And so what I hope is that young people get to dream big and dream bigger than they have before by seeing me stand here and answer all of your questions,” she said.

If Jean-Pierre’s Haitian parents had had their way, their daughter would be wearing a white doctor’s coat and stethoscope instead of the special lapel pin that identiﬁes her as a Biden staffer.

Jean-Pierre’s father, a New York City cab driver, and her mother, a home health care aide who also owned a hair salon, wanted her to become a doctor. But she disappointed them by failing her medical school entrance exam.

She went on to earn a master’s degree in public administration from Columbia University’s School of International and Public Affairs. She parlayed her interest in the environment into a job in the early 2000s as director of legislative and budget affairs for New York City Council Member James Gennaro, who was head of the Environmental Protection Committee.

It marked her introduction to politics.

Jean-Pierre wrote in her 2019 memoir, “Moving Forward,” that Gennaro took a “huge chance” by hiring her, even with her Ivy League degree. But he said in an interview that “she had a way about her that was poised and competent and friendly and effective without having any trace of qualities that could in any way, shape or form be off-putting.” “She was a rare talent that I was very fortunate to have,” Gennaro said. “I’m just very happy and proud to be a little footnote in her journey.”

Jean-Pierre made the leap into national politics after working for another city council member and later joining a labor union campaign aimed at Walmart. She ﬁrst worked on Democrat John Edwards’ presidential campaign before joining Barack Obama’s 2008 presidential bid in Chicago.

She followed Obama to the White House, working in his political affairs operation and later on his reelection campaign. She ﬁrst met Biden while working for Obama.

She moved around after leaving the Obama White House, including working for the ACLU and for the liberal advocacy group MoveOn as its chief public affairs ofﬁcer during the presidency of Republican Donald Trump. She also has been an NBC and MSNBC political analyst.

Jean-Pierre, 47, worked on Biden’s presidential campaign, then followed him to the White House as principal deputy press secretary. In that role, she led the brieﬁng on several occasions, making history in May 2021 when she ﬁrst subbed for press secretary Jen Psaki.

She also held regular off-camera gaggles with the much smaller group of reporters who travel aboard Air Force One with the president.

Biden promoted Jean-Pierre after Psaki, who had been press secretary since the start of the administration, announced she was stepping down last Friday.

Rahna Epting, executive director at MoveOn, said elevating Jean-Pierre was a “brilliant choice” by the White House, citing her personal story as a Black and openly LGBTQ woman, as well as her extensive past work on political campaigns and for advocacy groups.

“She can kind of see all the angles necessary and I believe she’ll do an excellent job,” Epting said.

But Jean-Pierre’s appointment also has its detractors.

Brad Raffensperger, the Republican secretary of state of Georgia, said the promotion was unwarranted due to her advocacy of “stolen election conspiracy

Next post Archbishop denies Communion for Pelosi, who pushes back