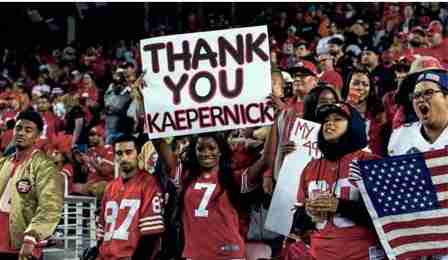 PHOTO COURTESY OF FOR THE WIN

The NFL protests led by Colin Kaepernick and America’s reaction serves as a sad reminder of an old Negro spiritual entitled, “Sometimes I feel like a Motherless Child.” Despite Mr. Kaepernick and other NFL athletes having expressly stated what and why they are protesting, the focus continues to be on the manner of their protest. This misplaced focus causes one to wonder whether America’s maternal instinct when it comes to issues concerning African Americans is fading.

What is universal about a child’s cry is a mother’s reaction to it. A mother’s first thought is “why is my child crying?” After a second of reflection, a mother’s instinct causes her to quickly determine all the possible causes that are making these tears stream down her child’s cheek. “Is my child hungry or thirsty?” “Is something causing pain?” “Is it fear?”

Whatever the cause, it is a mother’s instinct that channels all attention to seeking immediate resolution. Once resolved, the mother spends the minutes that follow comforting and reassuring her child that she is there and whatever caused the pain or fear is gone.

Another undeniable trait of a mother is her response to her child’s cry. Never will a mother say, “why are you crying in that manner?” A mother does not come to the child and say, “I don’t like the way you are crying, you need to cry a different way.” A mother does not say, “look at how Johnny cries, you should cry like him.” A mother may also not have the luxury of telling her child, “cry some other time, just not now.”

A mother’s focus is not the manner of her child’s cry, but the cause.

Since the 2016 NFL season, critics of Colin Kaepernick have taken issue with the manner in which he protested. As we’ve seen with the current NFL season, more and more players have joined Mr. Kaepernick in “taking a knee” and protesting the inequality and injustices that are plaguing the African-American community. Consistently, we see protest objectors angered and outraged over this manner of protest with many people suggesting, “you can protest, just don’t do it in a manner that disrespects the flag and the military.” Protest objectors unashamedly tell athletes to “focus on football” or “protest on your own time.” Mr. Kaepernick and his fellow athletes have told America exactly why they are in pain; that they hunger for equality and thirst for justice, yet America continues to focus on the manner of their cry.

The athletes protesting today make it clear that their protest is not against the American flag, the pledge of allegiance, or the National Anthem, yet individuals remain steadfast in trying to reshape the protest to be against something it is not – the American flag.

The first documented usage of the American flag was in 1792. The pledge of allegiance was first written in 1892. Periods that saw slavery and Jim Crow ravage the nation. For 178 years (1792-1970), individuals in our great country honored and pledged allegiance to the American flag while at the same time putting an entire race of people through slavery, Jim Crow and Civil Rights. This begs the question, “who honored the pledge more?” The person who merely recited the words that so eloquently end with “with liberty and justice for all,” while at the same time brutalizing an entire race or is it the person who actually fought for liberty and justice for all?

It is not the ability to say the pledge and stand in honor of it that makes you an American, as anyone can do that. It is the action that you take in ensuring that those words, “with liberty and justice for all” are not empty. One can speculate that Eugene “Bull” Connor or Sheriff Jim Clarke stood, and in good form, placed their hand over their heart at every occasion it was warranted. One can go further and guess that they recited with ease the words of the pledge of allegiance and mouthed the words to the Star Spangled Banner. Did that make them more of an American patriot than the civil rights activists and victims who were on the receiving end of their discriminatory orders and billy clubs while fighting for liberty and justice for all?

The answer is a resounding no! For the flag, the pledge, and the anthem are worth nothing if individuals do not adhere to the principles they represent. An example of this is seen in the U.S. Constitution. The 15th Amendment, ratified in 1870, declared that the “right of citizens of the United States to vote shall not be denied or abridged by the United States or by any state on account of race, color, or previous condition of servitude.” From 1870 to the enactment of the Voting Rights Act in 1965, the 15th Amendment was nothing more than words on paper, as those principles were not adhered to. Declaring that all men are created equal, while powerful and moving, is without substance and truth unless all men are indeed treated as though they are created equal.

As James Baldwin once said, “I love America more than any other country in this world, and, exactly for this reason, I insist on the right to criticize her perpetually.”

It may come as great surprise that people in this country want America in all her glory to be perfect. While perfection may ultimately be unattainable, that does not mean we as Americans stop trying. We as Americans must shine the spotlight on those injustices that do not live up to the principles upon which this country was founded. There are times when a mother knows that she may not immediately be able to stop the pain that causes her child to cry, but a mother will not stop trying at all costs.

Yohance A. Pettis, Esq., ypettislaw@yahoo.com is an Assistant U.S. Attorney in the Middle District of Florida.