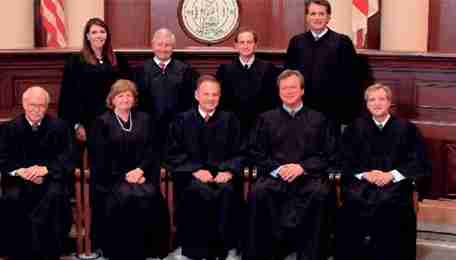 Every single judge on Alabama’s highest courts is white.

“The district court’s decision recognizes the potency of Section 2 as a weapon to battle racial discrimination in all sectors of state government,” said Ezra Rosenberg, co-director of the Voting Rights Project at the Lawyers’ Committee for Civil Rights Under Law. “We will now continue to aggressively litigate this case to achieve a remedy that gives African American voters a real opportunity to elect members to these courts which play such important parts in their lives.”

“The Alabama NAACP is elated that the court has ruled in favor of the people to deny Alabama’s motion to dismiss this case,” said Benard Simelton, president of the Alabama NAACP. “We will continue to fight to ensure that African Americans are treated equally under the law and have the ability to elect judges of their choosing.”

The Alabama Supreme Court, and two intermediate appeals courts – the Court of Criminal Appeals and the Court of Civil Appeals – elect their judges via statewide contests. Because whites outnumber African Americans in the State, and because whites and African Americans consistently prefer different candidates, white-preferred judges virtually always win. Plaintiffs in this case, including the Alabama State Conference of the NAACP and four individual Black voters, allege that this method of electing judges unlawfully dilutes Black votes in violation of the Section 2 of the Voting Rights Act of 1965.

Plaintiffs assert that electing judges by districts, just as the State does with members of its legislature and Board of Education, would provide African Americans with the equal opportunity to elect candidates of their choice.

In the court’s opinion, W. Keith Watkins, Chief Judge of the U.S. District Court for the Middle District of Alabama, a George W. Bush appointee, rejected all of Alabama’s arguments to dismiss the case. Chief Judge Watkins noted critical differences between Voting Rights Act challenges to the method of electing trial judges, who can act unilaterally, and appellate judges, who decide cases in panels. He also held that Plaintiffs have standing to bring this suit and that sovereign immunity does not immunize the State.

The suit is part of the Lawyers’ Committee’s national initiative to bring state courts into compliance with the Voting Rights Act and promote judicial diversity.

The Lawyers’ Committee is litigating a suit in Texas alleging that the statewide method of electing its high court judges unlawfully dilutes Latino votes.