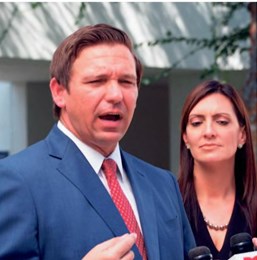 Our democracy obligates lawmakers to listen to the people and our constitution. Rarely in Florida history have these two institutions spoken more clearly than last election’s Amendment Four.

This amendment, restoring civil rights to most ex-felons, passed with 64.5 percent of the vote. It was a resounding, restorative rejection of a discriminatory clemency process rooted in racism and maintained by a state government unreflective of the majority of Floridians.

The amendment’s self-implementing language automatically restored civil rights to about 1.5 million Floridians — and more than 1 in 5 black citizens. That should be the end of the story.

However, Gov. Ron DeSantis and the Florida Legislature have not championed this historic moment. They’ve been obstructing its implementation or silent — equally criminal.

While supervisors of elections all across our state opened the rolls to ex-felons almost immediately, lawmakers moved swiftly to prevent our newly redeemed citizens from participating in democracy.

They’ve resorted to the same tactics implemented in 1885 by Florida neo-con federates scared of the future and social equality — a poll tax. And make no mistake, that poll tax was effective in preventing minorities from participating in democracy and enriching our state for generations — and this one would be effective, too.

By requiring full monetary restitution to be paid before civil rights are restored, lawmakers would be unconstitutionally burdening reformed ex-felons attempting to participate in our society.

They would also be promoting monetary restitutions and felony convictions already notoriously unjust and unbalanced, protecting the privileged and damning the penniless.

Lawmakers may believe their actions are victimless — but that’s only because they don’t know their victims. I do. They are our brothers. They are our neighbors.

They are all of us.

No one should be judged forever by their worst day.

But you don’t need to be convinced. You’ve already made your voice heard.

Gov. DeSantis has been taking bows following the pardoning of the Groveland Four — a long overdue pardon of innocent black men. It’s a nice gesture, but it’s also too late for those men and their families because recognizing racism and injustice decades late is not the same as righting it. That can only happen in the present.

That’s why it’s time for Gov. DeSantis to lift his head and look around.

The Florida Legislature is attempting to unconstitutionally condemn hundreds of thousands of Floridians to perpetual second-class status, ignoring the will of the same voters that elected him governor by a margin of error. These are the same voters he’s supposed to be leading. Gov. DeSantis must recognize that this poll tax is a threat to all of us, and his silence is being filled with a campaign against voters, against ex-felons and against our constitution.

As Fredrick Douglass wrote, “Where any one class is made to feel that society is an organized conspiracy to oppress, rob, and degrade them, neither persons nor property will be safe.” Andrew Gillum, the 2018 Democratic nominee for governor and a former Tallahassee mayor, has committed to registering one million new voters in 2020.

Next post What happened to Notre-Dame’s precious art and artifacts?