Drain the swamp – starting with Congress! 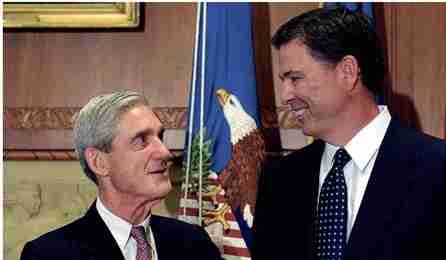 Russia! Russia! Russia! I don’t know about you, but quite frankly, I am extremely tired of hearing about the entire Trump family’s collusion with the entire Russian hierarchy and spies to get Donald Trump elected as POTUS.

There has been absolutely no evidence of said collusion, but a claim that 16 intelligence agencies have agreed that Russia “meddled” in the November 2016 election on behalf of Donald Trump, even though there is evidence of millions changing hands between the Clintons and Russians.

There have been at least six (6) separate Congressional investigations and the former Director of the FBI James Comey admitted to Congress that he broke the law and leaked a memo he wrote about a meeting with President Trump to one of his friends with instructions to leak said memo to the Press so that the DOJ would have no other choice but to appoint a special counsel to further investigate Trump’s so-called collusion with the Russians.

So Congress and Special Counsel Robert Mueller (James Comey’s BFF) continue to press the issue and throw out insults after insults to everyone connected to Trump.

Everyday – all day long – all you hear on the “news” is Russian collusion. “President Trump is nothing but a puppet controlled by Russian President Vladimir Putin.” This is the only news, for the most part, discussed on the mainstream media. I’m sick of it.

When Donald Trump won, Hillary Clinton and the entire Democratic establishment began their campaign of “resist.” They have determined that they will block every effort of Trump’s to “make America great again” and have refused to work with him on any of his policies, even the ones which reflect their agenda as well.

Making matters worse is the Republican establishment’s refusal to do the same. Neither Party seems to care what that does to the future of this country and “WE, THE PEOPLE.”

investigations of their own POTUS. They’re talking about Russian contacts as much as the Democrats, instead of protecting their president.

I’ve never seen anything like this as long as I have been involved in politics. I even left the Democratic Party because of the illegal and unethical things I saw them do, especially to the Black community, in their efforts to remain in control. Then the Republican Party seemed to be more in tune with my ethics and morals.

The one problem I saw was the Republicans would let the Democrats destroy their people while they were silent and wouldn’t fight back. (For example: They called George W. Bush everything but a child of God – Hitler, murderer, etc., but nobody fought back.)

That’s what the people who voted for Donald Trump saw – his willingness to fight back. Now he needs his people to fight for him. But it seems as if nobody but his family is willing to fight the lies and innuendos constantly thrown out by the liberal press and the liberals in Congress.

Just over the weekend, The Boston Globe reported that both former Florida governor Jeb Bush and billionaire businessman Mark Cuban “rip Trump at Central Park festival,” saying that “President Trump’s performance in the White House will make it harder for Republicans – and billionaires – in the coming elections.”

What is so disappointing is that both Republicans and Democrats have been attacking Trump since he took the oath of office. Democrats have always accused Republicans of being racists and not working with President Obama, but Republicans never treated Obama like Democrats are treating Trump.

And Republicans have been more horrible to Trump than they were to Obama or any other Democratic president. The Republican members of Congress, especially in the Senate, have blocked every effort to repeal and replace ObamaCare, even though they have been complaining about it for seven (7) years and President Trump is ready to sign it.

Trump ran on “draining the swamp.” Well he needs to start with Senators Susan Collin, Rand Paul, Chuck Schumer and others. Republicans can’t even pass one bill, opening the doors for mean talking Democrats to blame them for all the evils affecting people on a daily basis.

No wonder so many voters are changing their registration to Independent or Non-Partisan. The swamp stinks. They all need to be fired.