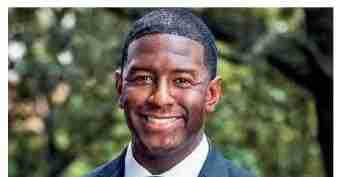 Floridians who may have doubts that a very liberal politician can ever become governor of the state have one certainty staring them in the face and it has a name: Donald Trump:

Most pollsters and supposed political experts predicted that Bernie Sanders could not become president and mostly shunned him and his campaign of “political revolution” and voted instead for the mainstream candidate Hillary Clinton. The unpredictable happened and Trump – who was given little chance of winning – is now in the White House.

So, the first truth for voters of this state is that the unexpected can happen in politics. The second truth is that what may seem unexpected could, in reality, be entirely predictable. Many of those who wrote off Trump have long since acknowledged they did not factor into their assessment of candidates for the 2016 presidential election the depth of frustration, resentment and anger of a large segment of Americans towards the establishment.

That is where the contest between Andrew Gillum and Ron DeSantis stands now, two days after the gubernatorial primary election. Gillum, the mayor of Tallahassee, who was endorsed by Sanders, is facing off against DeSantis, whom Trump endorsed. It will be a face-off between surrogates. Those who have been complaining bitterly about the kind of president Trump has turned out to be have a clear chance to convert their frustration, resentment and anger into votes come Nov. 6, as his supporters did in 2016.

But there are sobering facts that Gillum supporters have to consider. Perhaps the most important one is that Gillum is an African American – in a state where whites are 63 percent of the registered voters and which has never been kind to blacks, who number 13 percent. It has taken this long for a black to even be nominated by either party for the highest office since Florida became a state on March 3, 1845 – 173 years ago. And DeSantis seemed to be setting the tone of his campaign on Wednesday when he said voters should not “monkey this up,”

though he explained he was speaking about “a socialist agenda.”

The second reality is that Gillum won on Tuesday only because Democrats split their votes among the five candidates. He garnered only 34 percent of the Democratic votes, meaning that two of every three Democrats voted against him. Gwen Graham was a close second with 31 percent and Philip Levine was third with 20 percent. For Gillum and the Democrats to finally take the governorship after 20 years of trying, they will need not just a super “souls to the polls”

campaign to bring out black voters but also must forge unity among all Democrats, who are 4.8 million of registered voters, compared with 4.5 million Republicans. The candidates who lost to Gillum must now unite behind him and bring their supporters along. Gillum must also win over Independents, who number 3.4 million and who, by state law, could not vote in the primary.

In the Democrats’ favor is the fact that DeSantis has cast himself as a mini-Trump, Fox News saturation coverage and all, which means, among other things, that he is rabidly anti-immigration in a state where immigrants comprise a very large segment of the population, with Latinos numbering 16 percent of registered voters. It won’t be a surprise if they still vote for DeSantis – nor would it be a surprise if they go for Gillum.

It will probably help that he is a hometown son, raised in Richmond Heights in a county with a majority Latino population.

Some analysts have suggested that Gillum, 39, is a political novice but while this is his first bid for state-wide office, he does have political experience. Raised in Gainesville, the son of a construction worker and a bus driver, he graduated from Gainesville High School, where the Gainesville Sun recognized him as one of the city’s “Persons of the Year.” He attended Florida A&M University in Tallahassee, where he was elected president of the Student Government Association and the first student elected to the FAMU board of trustees. The Congressional Black Caucus recognized him as an “Emerging Leader of 2003”.

Gillum was also a member of the board of the Black Youth Vote Coalition, an arm of the National Coalition of the Black Civic Participation based in Washington, D.C. He won election to the Tallahassee City Commission, at 23 the youngest person to do so, and 10 years later he was elected mayor.

A wide range of issues will face the next governor of Florida, following decades of Republican control that, at best, has ignored the interests of blacks and working people generally. Top issues will include speedy repeal of the “stand your ground” law, giving former prison inmates the right to vote and generally reforming voting rights, as well as providing health care for all, especially after the Rick Scott administration turned down billions in federal subsidies under the Affordable Care Act.

But, for now, there is one simple issue for voters and it has a name: Donald Trump.

Previous post Democrats move back toward trusting the people