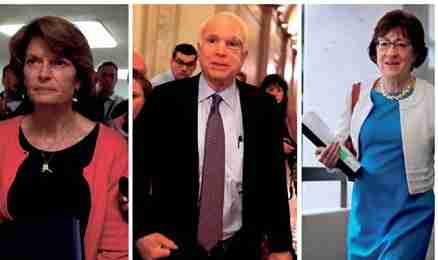 Three Republicans, John McCain of Arizona, Susan Collins of Maine, and Lisa Murkowski of Alaska, all voted against the “skinny repeal” of the ACA.

It is a perversion of politics and a mockery of American democracy to pursue ideological purity at the expense of the good of the nation.

Yet this is what the Republican Party, particularly its so-called conservative wing, has been doing with the Affordable Care Act, the so-called Obamacare, for more than seven years and especially since January when the Grand Old Party captured both Houses of Congress and the Presidency. That the vindictive campaign against Obamacare has so far failed is a triumph for those who believe that politics is the art of the deal and that implacable ideological rectitude on the part of the majority is a form of dictatorship. Compromise, above all else, has to be the guiding light in a democracy.

So it is good that the Obamacare “repeal and replace” campaign has been stymied. The “conservatives” must not succeed in their single-minded drive to take away health insurance from between 11 million and 32 million Americans, depending on which initiative is pushed at any given moment.
But it is the blind pursuit of ideological correctness that must be called into question because it is from this state of mind that all else flows.

It is good for democracy that there are at least two political parties; in fact, the more the better. It is assumed that each party would offer a vision of the future that advances the goal of making the United States of America a less imperfect union.

The democracy undertaking is built on the supposition that it is unlikely that either party will get everything it wants and that debate and compromise will produce an acceptable path forward. That is the essential purpose of Congress or else there is no reason for the institution; edicts would work just as well.

The Republican Party’s main raison d’ tre is to shape an America where there is as little government interference as possible in the affairs of people, in which individual enterprise is the path to a successful future, preferably guided by Christian principles.

The modern Democratic Party offers a more expansive vision of the future, is more inclusive and more inclined to government having a role in helping those in need, such as the sick and the poor.

Those two visions of America are not necessarily mutually exclusive, especially since the 2016 elections showed the nation is almost evenly divided politically. The fact that the Republican Party won control of Congress and the Presidency gives it a splendid opportunity to demonstrate that the policies it promulgates would indeed make for a better country.

The Republican Party does not support government involvement in the insurance industry (just as it does not believe government should be involved in providing pensions through the Social Security program). But since the Congressional Budget Office has warned several times that unraveling Obamacare without substituting a program that will offer health insurance to those who are currently covered under it would take away health benefits of millions of Americans, it is more than fool- hardy to do so.

So Republican Senators John McCain of Arizona, Susan Collins of Maine and Lisa Murkowski of Alaska must be commended for their courage in standing up for what is right and helping to defeat the latest effort to gut Obamacare. McCain, in particular, probably saw the absurdity, as one Twitter user pointed out, of helping to deprive millions of health insurance when he himself is battling an aggressive form of cancer.

The shame in this sorry saga is that the handful of “minority” Republican senators, such as Marco Rubio of Florida, a Cuban American, and Tim Scott of South Carolina, an African American, are ignoring the contradiction of voting to abolish Obamacare although Latinos and African Americans have benefited the most from the legislation. It is not a matter of race as it is of gross socio-economic inequity.

It costs taxpayers probably $500 million a month to pay for the Presidency and Congress and they have done virtually nothing since January. Imagine what could have been accomplished if the zeal to eliminate Obamacare had been applied to programs for the betterment of America.

The Republicans may yet repeal the Affordable Care Act, if only to have a legislative win – any legislative win – but the hypocrisy of a vision that seeks to deprive millions of Americans of such a fundamental right as health care will live on long after the current chaos is ended, one way or other.