An evening of praise and worship 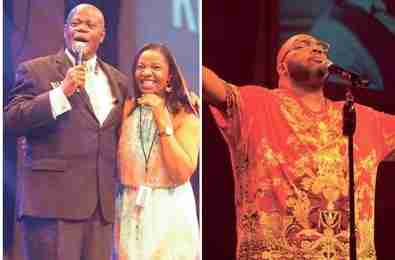 The Faith Center in Sunrise was alive with praise and songs from some of gospels top recording artists such as Le’Andria Johnson, Tye Tribbett and Marvin Sapp.

PHOTOS COURTESY OF THE WIGGINS AGENCY

An Evening of Praise and Worship Celebrating the Kingdom was held on Sunday, Feb. 18 at The Faith Center in Sunrise.

Le’Andria Johnson is the Season 3 winner of BET’s Gospel competition show, “Sunday Best.” She became the first contestant to receive a Grammy Award in 2012. In addition, Johnson has had three singles featured on the Billboard top charts. Her single “I Shall Leap into My Destiny” entered the Billboard Gospel chart at No. 1 and her album “The Awakening of Le’Andria Johnson” debuted at No. 1 on the U.S. Billboard Gospel Albums. Johnson has released a new album entitled “Bigger Than Me.”

Tye Tribbett is a singer, songwriter, choir director and multi-instrumentalist released his first solo album in 2010; which was followed up by “Greater Than” in 2013. “Greater Than” proved to be a big step for Tribbett as it earned him two Grammies. Tribbett’s new album “The Bloody Win” is the follow-up to 2013’s “Greater Than” and is preceded by lead single “Work It Out.”

Marvin Sapp, singer-songwriter and Pastor of Lighthouse Full Life Center Church began his solo career in 1996. He received crossover fame in 2007 with the release of his single “Never Would Have Made It.” The single peaked the Billboard charts in various sectors from Gospel to R&B and Hip Hop. The multiple GRAMMY nominated, 22-time Stellar Award-winning superstar releases much-anticipated new music, with the new album “Close.”

Next post Don Carter, owner who helped bring NBA to Dallas, dies at 84