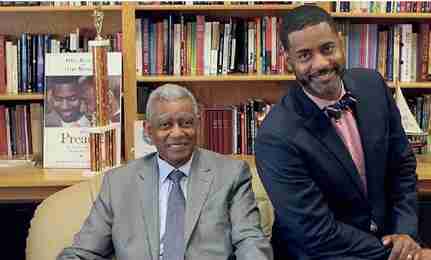 The tradition began at Tabernacle Baptist Church in Augusta, Ga., and shifted when the 46-year-old preacher transferred to Chicago’s Trinity United Church of Christ. His father, 82, pastor emeritus of Olivet Church in Cleveland, is a civil rights veteran who marched in the 1960s with the Rev. Martin Luther King Jr.

RNS spoke to both father and son, whose churches are predominantly African American, about their tag-team preaching, the state of the black church and what it means to pass the baton from one to the other.

The interview has been edited for length and clarity.

How did you start tag-team preaching?

Son: I witnessed other ministers do a tag-team message in Institutional Baptist a very different vein, a husband and wife tag team for their married couples ministry in the ’90s. That was the first time I heard or witnessed a tag-team message. And it was my initial idea to create a tag message for a father and a son — not two different messages but one message preached by two different people. And, Rev. Moss Jr., you accepted this idea?

Father: With enthusiasm. I was familiar with dual presentations together but I had not participated in the true tag team where you carry in a dialogical way the message between the two individuals.

Rev. Moss III, what is your first recollection of seeing your father preach and did you think early on that you would follow in his shoes?

Son: I had the opportunity to hear him every Sunday. It was a part of my childhood growing up witnessing my father preach not just in church but at conventions, revivals, special programs across the nation. I had great respect and love Rev. Moss Jr., what is your first memory of seeing your son preach and what did you think of his sermon?

Father: My deepest, longest and profound memory is the for the African American homiletical tradition, respect at a level where I never would have even thought, early on, that I would be able to stand in a pulpit and communicate at the level my father communicates Sunday to Sunday or the level of the individuals my father brought to the pulpit — Gardner C. Taylor, Wyatt Tee Walker, Carolyn Knight, Bishop Vashti McKenzie and many others.

But you changed your mind and decided this was to be? Son: I did. I was called to the ministry during my time period at Morehouse College. My focus was not the pastoral ministry but media, cinematography, some form of activism. I had a great respect for the church. I always knew that I would be a part of a church family but I never envisioned I would be leading a church.

time he did our Youth Day at Olivet Institutional Baptist Church in Cleveland. He was about 15 years old and was the youngest Youth Day speaker for the 11 o’clock worship. And he did, I must say, a terrific job.

It was at that moment that I felt an inner something that said, you haven’t heard the last of this. His decorum, his naturalness with his delivery, was beyond expectation. What is your sense of the state of the black church from your perspective as pastors, one more in the 21st century and the other in the previous one? Do you think its work has changed from one generation to the next?

Father:The necessity of the black church, the African American church, I think is continuing and compelling. We in my generation depended on the delivery of the Word from the individual but we did not take advantage of all of the technology that was becoming big. I think in this age we must utilize all of the technology plus imagination and all of the equipment that’s available to us to communicate, to involve and to be relevant and liberating both in our word and in our deed.

Son: I believe that there are some profound shifts taking place within the African American church, specifically in and around issues of technology and prophetic witness. We now have the ability, with the use of digital technology, to spread the message and engage in activism, not just locally but globally. The black church has to embrace this and there’s a new generation of prophetic ministers and ministries engaging the technology. The danger today, for the black church specifically, is the influence of empty, self-centered capitalism masquerading as Christianity, better known as prosperity (gospel).

On a less serious note, the son seems to prefer bow ties and the father wears regular ones.

Father: You might be interested in knowing that about 70 years ago, I wore bow ties and it was quite in style. And then I went from the bow tie to the string tie and of course I wear a bow tie now on special occasions. But my son has taken it to a different level. I used bow ties that were already tied. You know, the clip-ons.

Son: I developed a love for bow ties at Morehouse College. I only had one suit and I was not a suit wearer. I pushed against wearing what I considered to be corporate uniforms.

When I witnessed brothers at Morehouse wearing a bow tie, this was, at the moment, a way for me to rebel. Also, having a bow tie and regular tie would look like I was wearing something different. Both of you are known for activism, ranging from civil rights to environmentalism. Are there any causes on which you tend to disagree?

Father: I don’t think so. In my beginning years, really as a youth, I started in the civil rights movement as a solicitor for NAACP membership in the days when in certain parts of the country being a member of the NAACP was dangerous. That activism has been a part of our family and Otis III has inherited a family with a tradition of activism, but he has not rested on our legacy or our history. He has taken it into new dimensions. The environment is one.

Son: I learned from my mother and my father the importance of activism. I was a part of a faith community where women were affirmed. I had been raised in an environment that critiqued patriarchy. I was raised in an environment that critiqued corporate interests that were not centered on the common good. So, my friends, we would joke growing up, saying that every other week we were boycotting or protesting something at Olivet Institutional Baptist Church. We can’t drink Coke this week?

Or, we can’t drink Pepsi? Oh, they’re in South Africa? Well, what can I drink? What can I eat?

In the middle of a sermon you jointly preached titled “Prophetic Grief,” about the Emanuel African Methodist Episcopal Church tragedy, the father turned to the son and verbally passed the torch, asking him to speak to and for the next generation. What is it like for each of you to have the ministry of preaching passed from one to the other?

Father: No tree tries to hold onto last year’s leaves and fruit.

You give it away and hope that the ground, the atmosphere will take it and make better fruit for the next season and the coming generation. I think we ought to preach, teach and practice that and we should not be threatened by the next generation doing a better job than we have done. We ought to cheer them on, encourage them and give to them, with all of our frailties and fallibilities and mistakes and flaws. We ought to try to pass on something that is worthy to be received but also something that they can take and do a better job.