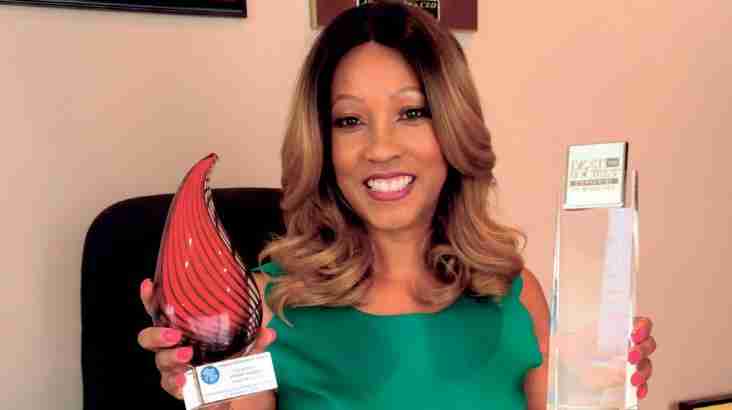 DETROIT (AP) – There is no denying that Alison Vaughn reflects the environment where she was raised.

Vaughn’s voice – crisp, commanding and professional – conjures up memories of local groundbreaking TV news anchors in Detroit like Beverly Payne, Diana Lewis and Carmen Harlan. Because of her voice, it is not surprising that Vaughn is periodically asked by friends and strangers if she is a broadcaster.

But even more than her voice, it is Vaughn’s look – stylish and tasteful by most anyone’s standards – that tells the world that the glory days of Detroit’s Avenue of Fashion lives on through a proud Black woman who grew up just a few steps away, the Detroit Free Press reports.

“I’ve gone from the Avenue of Fashion to Miss Fashion Global,” declared Vaughn, who uses the location of Marvin Gaye’s former ranch-style home at Outer Drive and Monica as a reference point when identifying the neighborhood where she grew up.

Vaughn speaks with a tone of authority about the Avenue of Fashion, which, before the creation of area malls, and even afterward, was recognized as a luxury shopping district stretching from 7 Mile to 8 Mile on Livernois. While the Avenue of Fashion has special historical signiﬁcance in Detroit, Vaughn’s mention of Miss Fashion Global describes a recent event in November when she was crowned the Michigan winner (40 and over category) for the pageant. And it is Vaughn’s ability to draw strength from her Detroit past while ﬁnding new ways to inspire others that fuels the Jackets For Jobs “ministry” she embarked on 21 years ago.

“I’m clothing the poor, and like feeding the hungry, it is a ministry,” said Vaughn of Jackets For Jobs, the nonproﬁt she created in 2000, which has assisted more than 30,000 job seekers by providing professional attire, career training, and other resources and services at no cost to people of low income. “During the holiday season, and anytime during the year, I believe our mission to help people ﬁnd and retain employment is a mission everyone can understand because everyone understands the importance of a job.”

A proﬁle provided by Vaughn reveals that Jackets For Jobs’ clients are primarily in their 20s and 30s, with many entering the job market for the ﬁrst time; 95% are single mothers, including many from area shelters; and almost all of Jackets For Jobs’ clients report household incomes of less than $10,000. Vaughn makes it crystal clear that she is driven to inspire the people she represents while elevating awareness of her cause. And in doing so, she is not afraid to step outside of the box, such as her participation in the Miss Fashion Global pageant and her appearance on the “You Bet Your Life” game show with Jay Leno, which aired in November. But Vaughn identiﬁes one person – her sister Cheryl – as her own inspiration for everything she does on behalf of Jackets For Jobs. While on leave from her job as a flight attendant for United Airlines following the tragic events of Sept. 11, 2001, Vaughn received a call from her aunt Willie Mae saying Cheryl wanted to reunite with her after nearly 20 years of no communication between the two sisters. The reunion would be short-lived as Vaughn found out that Cheryl was dying of cancer. And a few months later, Vaughn would be rocked again while handling the arrangements for Cheryl’s funeral.

But before Vaughn could begin helping, she needed to ﬁgure out how to create an organization without any previous business or organizational experience. To pull it off, Vaughn said, she turned to a Higher Power.

“It was a total, total, total leap of faith, but God won’t lead you where He can’t keep you,” testiﬁed Vaughn, a longtime member of Fellowship Chapel church, which is literally within shouting distance of Jacket For Jobs’ west-side location. “My supervisor at United was like: `Are you sure you want to quit?’ He said the airline industry was like quicksand, and that once you get in it’s hard to get out. But God told me: `I have bigger plans for you,’ so I looked my supervisor right in the face and I said, `I’m sure.’. .. The friendly skies are friendly, but I’m friendly down on the ground. And instead of providing jackets in the air, we provide the life jackets needed for employment to our people right here in the Detroit area.”

Along with her strong faith, Vaughn said she leaned heavily on Detroit institutions and her own Detroit journey to make Jackets For Jobs a reality. For example, during a time period when “the internet was brand new,” as Vaughn described it, she made weekend trips to the Detroit Main Library and got cozy with titles like “Grant Writing for Dummies,” and “Starting a Business for Dummies.” And when she needed some extra motivation, she often reflected on her days at Benedictine High School.

“Benedictine taught me values like the importance of giving back and working in the community, and in the 11th grade I was a volunteer candy striper at Grace Hospital,” said Vaughn, who attended St. Gerard Elementary and Presentation School before Benedictine. “I received a great education in Detroit. The city has been very good to me. And now I have come full circle because our west-side location serves our city right across the street from where I went to high school at Benedictine.”

On a recent December morning, from that same west-side location, business attire with labels reading Donna Karan, Calvin Klein, Michael Kors, Izod, Brooks Brothers, Tommy Hilﬁger and more were picked out for women and men, who tried on clothes and shoes with assistance from Vaughn and her team. And Vaughn said the department store look and feel of the whole scene was no coincidence, given that the space was created through a partnership with T.J. Maxx, which came about thanks to an influential family in history.

“Civil rights icon Rosa Parks’ niece, Rhea McCauley, told the community relations director at T.J. Maxx about us,” Vaughn said. “That was 2007 and we’re still partners, which includes T.J. Maxx being a major provider of the clothes we offer to clients. For the family of Rosa Parks to connect with what we are doing to help people in Detroit, that’s nothing but the Lord.”

Vaughn also called her partnership with Detroit at Work a “godsend.” “Detroit at Work is our ﬁnancial funding stream, and all of our client referrals come from Detroit At Work,” Vaughn explained. “The mayor’s goal is for everyone to be employed, but it’s a Catch-22 because if you don’t have appropriate attire for an interview you can’t get a job. Therefore, we feel very fortunate to be able to address this need through our services with support from Detroit At Work.”

On Wednesday morning at 7800 W. Outer Drive, an example of the Jackets For Jobs-Detroit At Work partnership was on display in the form of Michelle Wilson-Merriwether, a career coach for Detroit At Work. Dressed in red and white, coinciding with the holiday season and the colors of her hometown Louisville Cardinals, the Louisville native said she has come to love Detroit and that she has the utmost respect for Jackets For Jobs. “I began sending as many individuals as I could here (Jackets For Jobs) because I love their mission,” Wilson-Merriwether said. “This is the No. 1 referral for my team and it changes lives.”

Detroiter Destiny Jones, a 28-year-old mother of two (8-year-old Alvin and 4year-old A’layah Coates) is excited to have an opportunity to change her life with help from Jackets For Jobs and Detroit At Work. A day after interviewing with Jackets For Jobs, Jones was back at Jackets For Jobs’ west-side ofﬁce on Dec. 8 to start work.

“To get this job around the holidays means a lot to me and my family,” Jones said. “It makes my children happy, and it makes me happy – it makes me feel like a better woman.”

Minutes after expressing those thoughts, Jones displayed her happiness through her actions. Dressed in a business suit, with her head held high, she assisted men and women select attire for interviews. The conﬁdence exuded by Jones touched Vaughn, who said the new member of her team is now family.

“At our east-side location and our west-side locations, we are a family,” Vaughn said. “Many people who come to us will have contact with my own mother (Betty Henderson), and they look to my mother as a mentor ﬁgure.

“As a team, we are very close knit – we care for each other as family members and we treat the people we serve in our community as family. And we keep a box of Kleenex in every ofﬁce because every person we meet is a walking book. Each person is unique; everyone has a story that brought them to us. There’s always a tear, and we are there to hug and embrace and then help people move forward. We always have positive words of afﬁrmation for our clients because we understand where they are coming from and where they are trying to go.”