Perry writes book about the ‘Higher’ power that sustains him 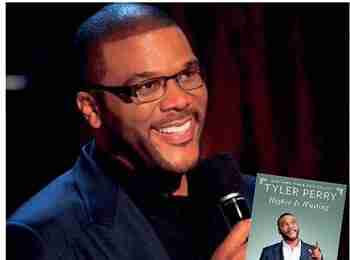 Tyler Perry shares stories from his life in his new book, “Higher Is Waiting” to inspire others.

NEW YORK — Tyler Perry has always relied on the word of God to lift him up in troubling times, but even he admits the onslaught of negative headlines over the past 18 months has tested his spirit.

(and now) the threat of nuclear war in North Korea, and I just found myself completely getting lost in it, waking up sad and depressed and didn’t know why,” he said.

So the entertainment mogul decided to stop waking up with bad news, restricting his TV diet to only certain times of the day so that it wasn’t flooding his brain. But the film and TV mogul also held tighter to what he says has kept him balanced — his faith.

Perry uses examples from his own life, from living with an abusive father to his early missteps in show business, to show how faith led him through; each story leads back to a Bible passage to underscore the point.

“Higher Is Waiting” isn’t the first Perry project to involve religion; his movies often touch on spirituality, to the point where it has garnered him some criticism over the years.

Perry says he’s not a Christian filmmaker; he’s a filmmaker who believes in Christ.

“If you look at ‘Acrimony’ that’s coming out next, there are no undertones of spirituality in it at all. It’s just a thriller that I wanted to do, just something totally different,” he said of his upcoming film starring Taraji P. Henson due out in March. “So I’ll be all over the place in my storytelling.”

But there are times when he wants to uplift people, and he tries to do that for a demographic that may be searching for inspiration.

“They can’t go to the therapist. They can’t get in the car and just go to the country for the weekend to clear their head,” he said. “I want it to be what church was to me growing up — going to church was our relief.”

AP: You say you’ve become known in Hollywood as the guy to go to for advice. How did that happen?

Perry: I’m not judgmental and I never ever share people’s business. … So it was just over the years, I just think that people just started to, the word kind of got around that, ‘You should call him, you should call him.’ … And it’s exhausting at times. But for the most part just being able to be in the position where you’ve got a bunch of people in this business who can’t trust anyone, and then some of this information is so sensitive and so private and so painful that they needed somewhere to be able to work it through and I’m just glad God put me in a position where they could come to me.

AP: You’ve never written your autobiography but you tell various stories about your life here. Will you write one in the future?

Perry: I was very careful what I share. There’s a lot more. I don’t know how to tell my full story without leaving people, bodies in the street, and I’m not interested in doing that. I’m not interested in tearing anybody down, not interested in destroying anybody. So as long as those people are on the Earth, that (auto)biography probably won’t ever happen again. And the only reason I’m talking about it as much as I am now is because my mother’s passed. Yeah, I wouldn’t have talked about it before.

AP: It’s easy for people to lose faith. How have you stayed the course?

AP: How did the birth of your 4-year-old son, Aman, affect your faith?

Perry: First of all, seeing him born, seeing that moment, I was just the most — I was just in tears. Just the thought of a human being coming into the world, it blew my mind. … I pray now more than I probably ever have in my life just for him. … It makes me depend and lean on God even more.

AP: So many women and men have spoken out about the abuse they endured in Hollywood. You have been vocal about the sexual abuse you suffered as a child. How hard is it to reveal something so painful?

Perry: It takes a tremendous amount of courage and it’s very, very scary and you don’t know how people are going to react to it, so being in this moment you know I’m hoping that there is change. But here’s what I’ll say about that as far as change goes. The most times that I’ve seen change is when people in power start to reflect the victim. So the more the people in power start to look to act like the victims, the more things will change.