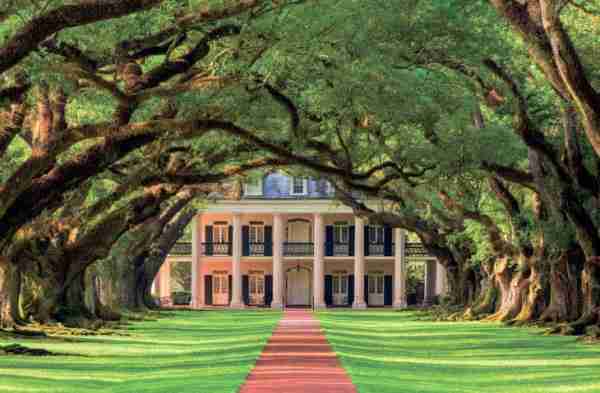 Birmingham, Ala. (AP) – Antebellum Southern plantations were built on the backs of enslaved people, and many of those plantations hold places of honor on the National Register of Historic Places. But don’t look for many mentions of slavery in the government’s ofﬁcial record of places with historic signiﬁcance.

The register’s written entries on the plantations tend to say almost nothing about the enslaved people who picked the cotton and tobacco or cut the sugar cane that paid for ornate homes that today serve as wedding venues, bed-andbreakfast inns, tourist attractions and private homes – some of which tout their inclusion on the National Register like a gold star.

The National Register of Historic Places lists more than 95,000 sites that are important to the story of the United States.

From some of the most famous places – such as George Washington’s Mount Vernon estate – to scores of lesser-known plantation homes in the rural South, register entries often ignore the topic of slavery or mention it only in passing, an Associated Press review found.

AT MOUNT VERNON, NO “SLAVE” Experts blame a generational lack of concern for the stories of black people and, in many cases, a shortage of records. While some narratives have been updated to include information about enslavement, such changes aren’t mandatory and many have not.

The National Register’s entry for Mount Vernon, approved in 1977, doesn’t use the word “slave,” although more than 300 enslaved black people worked the ﬁrst president’s ﬁelds, cooked his food and cleaned the house where tourists now roam.

The entry for Thomas Jefferson’s mountaintop home, Monticello, notes that the third president owned as many as 200 slaves. Yet it generally avoids discussing them or the details of their ownership by the author of the Declaration of Independence.

Those omissions likely contributed to the loss of slave housing and other structures linked to the economy of enslavement because no one deemed them important, preservationist Ashley Rogers said.

“The problem is, the damage has been done,” said Rogers, executive director of the Whitney Plantation Museum near New Orleans.

The Whitney, which documents slavery at a pre-Civil War plantation near New Orleans, draws tens of thousands of visitors annually and is known for discussing topics that other tourist plantations ignore. Yet even its entry in the National Register, completed in 1992 before the current owner purchased it, doesn’t mention the slaves who toiled there.

Similarly, visitors to Mount Vernon or Monticello in Virginia can now hear stories and see exhibits about slave life – but those features were added long after the landmarks became some of the ﬁrst sites listed in the National Register.

“It’s telling us what we have been valuing as a society and how we understand slavery,” Jeffries said.

Congress established the National Register of Historic Places under a 1966 historic preservation act aimed at of information that’s publicly available about places listed on the register, the Park Service said. And they often ignore the enslaved people who provided the labor on antebellum plantations.

Magnolia Grove, a state-owned antebellum plantation home dating to 1835 in Greensboro, Ala., has a slave cabin that tourists can visit, plus displays about enslaved people, yet its 1972 entry on the National Register doesn’t mention slaves.

“COLORFUL” SLAVE TRADER The state-operated Kingsley Plantation near Jacksonville was home to slaves, yet its National Register entry doesn’t say who they were or how they were forced to work in the Southern heat. Instead, it describes tabby –a kind of concrete made of oyster shells – and the “colorful” slave trader Zephaniah Kingsley, who gets credit for having “carefully trained” enslaved people to farm his cotton.

A historian who has researched the antebellum South, Clifton Ellis, said many National Register entries reflect a time when neither African American history nor the cultural importance of buildings were emphasized.

“You might see that there’s a relation between lack of information and when they were written,” said Ellis, of Texas Tech University. “It was only during the `70s that historians were beginning to look at slavery more closely. That took time to work its way through the academy.”

Many plantation owners also kept poor records of slave life and did little to preserve reminders of it – another reason for the information void.

The civil rights movement drew attention to the need for inclusive history, Ellis said, and nominations have improved with time. Property owners and historical groups are allowed to update National Register entries with new information. Some have done so with information about slaves.

Today, any new nomination of an antebellum site that doesn’t discuss its ties to slavery would be rejected for more work, said Sarah David, who oversees the National Register program for North Carolina.

“You can’t talk about something that was built before the Civil War without talking about enslaved people,” she said. “They were just in it. They may have built it.” The historical blindness about slavery and enslaved people isn’t limited to plantations in the National Register.

The entry for Alabama’s white-domed Capitol details its role as the place where delegates established the Confederate States of America in 1861, but doesn’t cite slavery’s role in the rebellion or Horace King, a onetime slave credited with building the elegant, curved stairways in the building’s main entrance.

“NEEDS TO BE CORRECTED” Joe McGill routinely sleeps in old slave homes as part of The Slave Dwelling Project, which seeks to tell the forgotten stories of enslaved people. Sketchy accounts of slavery are a product of a decades-long period when white male historians primarily told the stories of white males, he said. “It needs to be corrected because it coincides with an incomplete narrative,” said McGill, who has slept in about 150 slave dwellings in 25 states in the South and the North.

But updating all that outdated history would be daunting, historians said.

With hundreds of old plantations listed on the National Register and many preservationists focused on saving endangered sites rather than updating information about existing ones, rounding out the history of antebellum farms could take years.

Next post B. Smith, model turned lifestyle guru, dead at 70