A SUMMER TOMATO GRATIN WITH BRIGHT FLAVOR AND NO MUSH 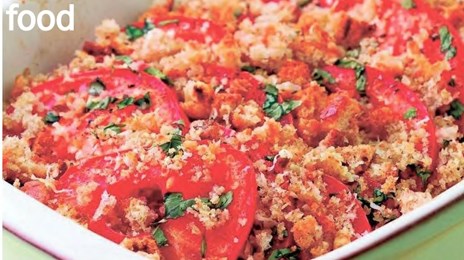 A summer tomato gratin should burst with concentrated, bright tomato flavor and contrasting firm texture from the bread, but most recipes lead to mushy results. Not this one.

Starting our gratin on the stovetop initiated the breakdown of the tomatoes, drove off some moisture that would otherwise have sogged out the bread, and shortened the overall cooking time. We finished the dish in the dry, even heat of the oven. Toasting large cubes of a crusty artisan-style baguette ensured that the bread didn’t get too soggy once combined with the tomatoes. After toasting the bread, we added the coarsely chopped tomatoes as well as garlic, a small amount of sugar, and salt and pepper.

Just before moving the skillet to the oven, we folded in most of the toasted bread and scattered the remainder over the top along with some Parmesan to create a crusty, savory topping that contrasted with the custardy interior.

A scattering of fresh basil provided color and bright flavor. The success of this recipe depends on using ripe, in-season tomatoes. Do not use plum tomatoes, which contain less juice than regular round tomatoes and will result in a dry gratin. You can serve the gratin hot, warm, or at room temperature. You will need a 12-inch oven-safe skillet for this recipe.

Adjust oven rack to middle position and heat oven to 350 F. Heat 1/4 cup oil in 12-inch ovensafe skillet over medium-low heat until shimmering. Add bread and stir to coat. Cook, stirring constantly, until bread is browned and toasted, about 5 minutes; transfer to bowl.

Cook remaining 2 tablespoons oil and garlic in now-empty skillet over low heat, stirring constantly, until garlic is golden at edges, 30 to 60 seconds. Stir in tomatoes, sugar, salt, and pepper. Increase heat to medium-high and cook, stirring occasionally, until tomatoes have started to break down and have released enough juice to be mostly submerged, 8 to 10 minutes.

Transfer skillet to oven and bake until top of gratin is deeply browned, tomatoes are bubbling, and juice has reduced, 40 to 45 minutes. After 30 minutes, run spatula around edge of skillet to loosen crust and release any juice underneath. (Gratin will appear loose and jiggle around outer edges but will thicken as it cools.)

Remove skillet from oven and let sit for 15 minutes. Sprinkle with basil and serve.