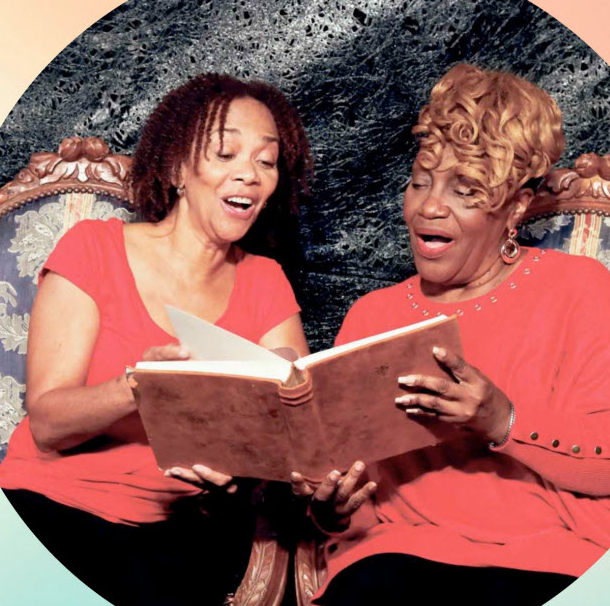 BOCA RATON – Award-winning actresses Avery Sommers and Karen Stephens transform themselves into the 100-year-old Delany Sisters – sharing the pair’s oral history as children of a former slave to their roles as Civil Rights pioneers – in the critically acclaimed play “Having Our Say.”

The play is based on the New York Times best-seller, “Having Our Say: The Delany Sisters’ First 100 Years.”

The show stars Broadway veteran Sommers and Carbonell winner Stephens, is directed by Genie Croft, and is being presented by the Primal Forces professional theater company.

“The Delany sisters were remarkable women, and they are being played by two outstanding actresses in this production,” said Croft.

“Avery and Karen bring such depth and humor to these roles, taking audiences on a journey that will inspire, educate and entertain.”

Born to a former slave, the Delany sisters went on to achieve tremendous success; Bessie as a dentist and Sadie as the first black teacher of domestic science in the New York City school system.

The play illuminates their well-lived lives with wit and wisdom.

Multi-talented and accomplished Sommers was nominated for a 2016-2017 Carbonell Award for Best Actress in a Play/Musical for The Devil’s Music…The Life and Blues of Bessie Smith, directed by Primal Forces’ Croft.

The highly regarded South Florida treasure received the Best Actress Award given by Arts and Entertainment Magazine of South Florida and the Silver Palm Award for Outstanding Contributions to the South Florida Theater Season 2015-2016.

Sommers performed her one-woman show I Love Being Here With You to two sold-out houses at the Raymond F. Kravis Center in 2016.

She recently appeared as “Motormouth Maybelle” in Hairspray at Actor’s Playhouse, Coral Gables, for which she was nominated for a Carbonell Award.

Sommers played “Matron Mama Morton” in the first national tour of the Broadway show Chicago, for which she won a Los Angeles Ovation Award. She appeared on Broadway in Ain’t Misbehavin’ in the Nell Carter role, and also in Chicago, Showboat and Platinum.

Stephens received a Carbonell Award for Best Actress for her performance in Zoetic Stage’s Fear Up Harsh, a New Times Best Actress Award for The Women’s Theatre Project’s production of Sarah Jones’ Bridge and Tunnel, and is a three-time Silver Palm Award recipient.

Stephens’ TV appearances include The Glades, Burn Notice and Netflix’s Bloodline. “The most provocative and entertaining family play to reach Broadway,” is how The New York Times’ critic assessed “Having Our Say.”

WHAT: “Having Our Say”

Next post AFTER A DORMANT DECADE, Chaka Khan blooms again