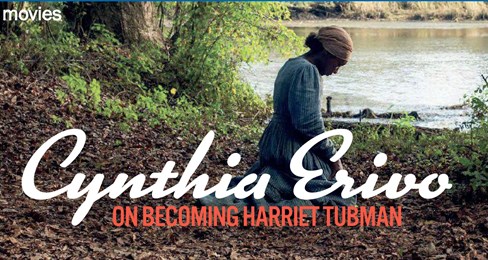 TORONTO (AP) – British actress Cynthia Erivo is relatively small in stature. In person, she is earnest and genial. In performance, the 32-year-old can appear achingly vulnerable. And if you’re not paying attention, she will bowl you over.

Even if you are, she probably will, anyway. Erivo’s inner and outer strength can be stealthy but overwhelming. It was her Tonywinning transformation as Celie in “The Color Purple” on Broadway that first brought her to the attention of American audiences. Ever since, the explosiveness of Erivo’s voice – an earthy yet heaven-sent soprano that aches with perseverance and grace – has been causing jaws to droplike anvils .

Now, after glimpses of her on-screen power last year in Drew Goddard’s “Bad Times at the El Royale” and Steve McQueen’s “Widows,” Erivo gives her first leading performance in the Harriet Tubman film “Harriet.” In the diminutive abolitionist she immediately recognized something of herself.

“She was a small woman who was underestimated completely. She should not have been able to do what she did. She suffered from narcolepsy and epileptic fits. Nobody thought she was as strong as she is,” said Erivo. “As a 5-foot-1 woman wandering about the Earth in my skin color, people do that a lot. I have a physical ability that people don’t see on the outside but when people do see, it’s different.”

Kasi Lemmons’ “Harriet,” now in theaters, is the first feature film centered on the Underground Railroad conductor. It’s a role that brings a new spotlight to Erivo, a fastrising star whose soaring voice and classical poise has already earned her, along with the Tony, a Grammy and an Emmy. At 32, she’s already within EGOT striking distance.

Out of the Way

Meeting earlier this fall in Toronto shortly before “Harriet” was to make it world premiere, Erivo was fully conscious of the moment she finds herself in, but also hesitant to too fully accept it as her own. “Harriet,” and her performance as Tubman, wasn’t about her, she said. It was also about Tubman, she said, and “Cynthia getting out of the way.

“There were definitely days that I know it wasn’t just me,” Erivo says. “It felt like she was there.”

For many accustomed to the more sanitized childrens book version of Tubman, “Harriet” is a fresh and authentic portrait of the woman known in her day as “Moses.” It focuses on Tubman’s initial escape from slavery in Maryland and her subsequent raids that led more than 70 people to freedom. It’s a strikingly younger and fiercer Tubman, beginning with her relationship to her husband, John Tubman.

“The one thing I wanted to make sure of was that people got to see her as a woman,” says Erivo. “We get to see her in love. We see her lose that love and we see what that does to her. From that she has to figure out what next. No one realizes that essentially what happened is she went back for her husband and things went south.”

Only recently did a picture of a more youthful Tubman surface, believed to be taken in the 1860s, not the later-in-life images that most know her by. The photograph, put on display at the Smithsonian’s National Museum of African American History and Culture in Washington earlier this year, helped guide the production.

“I look at her fingers. They’re long and lean. She’s youthful in it,” says Erivo. “And we see her in a different kind of dress. We can be reminded that as a free woman, she dressed like that. She was able to wear fine clothing. And she looked beautiful.”

Lemmons, the “Eve’s Bayou” filmmaker, used that image as a guide in capturing Tubman’s womanhood and strength. Naturally, a lot was riding on the performance of Erivo, a newcomer coming off her success in “The Color Purple.”

“As soon as we started rolling cameras and I saw her step into this role, any of my anxiety about her ability to portray Harriet instantly melted away,” Lemmons said. “I was completely taken with her dedication and commitment and her talent. I mean, she’s a star and everyone is about to know this. She’s a real movie star.”

Still, some backlash greeted the film when its first trailer was released. Such a quintessentially American role, some said, should have gone to an African American actress. Erivo, the daughter of Nigerian immigrants to England, was born in London and currently lives in New York. She responded to the criticism on social media at the time, explaining her passion for the role and the sometimes overlooked commonalities between black people on both sides of the Atlantic.

“At times it’s been tough,” she said. “But I have an understanding of where it comes from. I do really believe it’s a case of people feeling unseen, people feeling like there isn’t enough. These stories, they’re rare gems and they don’t come around as often as they should. Because of that, it stings more.”

“We do really have to have a conversation about the differences between African Americans and British people,” Erivo added. “We have to come together to talk about the similarities that we’ve gone through. I don’t know that there is a deep understanding between us about what we go through.”

Erivo started performing at 11 and, after studying at the Royal Academy of Dramatic Art, appeared in numerous West End productions. Around the age of 15, while dancing, she began a regular workout regime that turned Erivo into a muscular dynamo. She sometimes posts videos from the gym , both of her triumphs and setbacks.

“The choreographer for the dance group said to us, ‘You have to be fit for the dance and not let the dance make you fit.’ And I just sort of applied that to everything,” said Erivo. “I try to continuously condition my body for whatever comes its way.”

Much more will likely be coming Erivo’s way. She’ll play another American icon, Aretha Franklin, in an upcoming Nat Geo series. Music, she says, will continue to play a prominent role for her. (She recorded a rousing song for “Harriet.”) Erivo describes herself as having “a very crazy dream of being a true renaissance woman,” equally dedicated to film and music. One informs the other, she says. One possible project looms. Steven Spielberg and Oprah Winfrey are producing a new screen adaption of “The Color Purple” based on the 2016 Broadway musical Erivo starred in.

“That role changed my life. And I have decided that the role is never going to leave me. It’s stuck with me forever,” said Erivo suddenly tearing up. Her voice quivers before she steadies it. “So if I get to go back to it, it would change my life again.”

Previous post Beyond Netﬂix: What you get with the new streamers