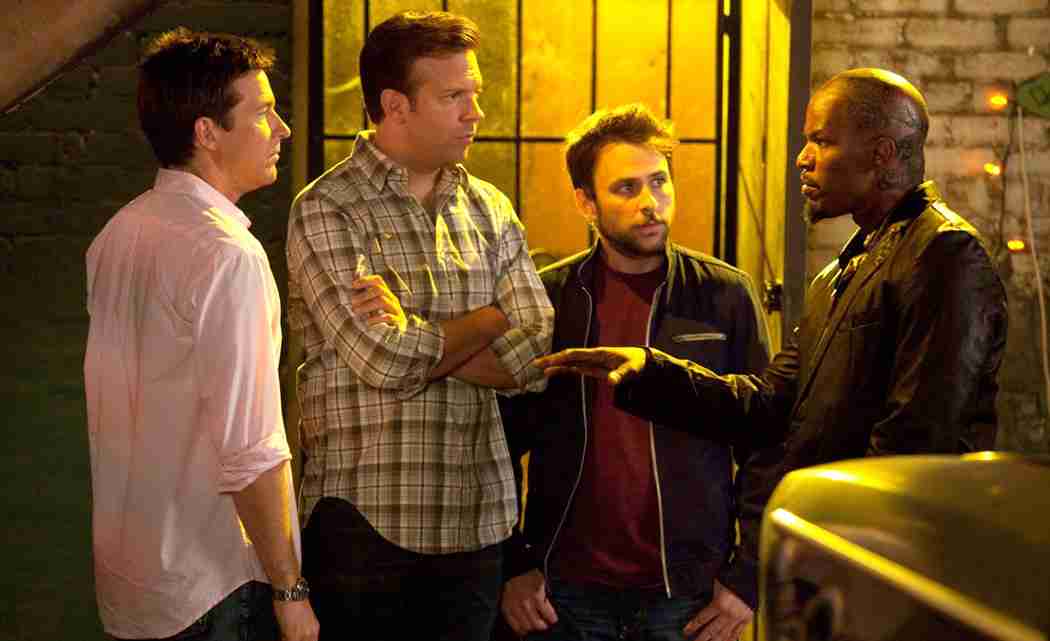 We’ve all been there. You spend 40 hours a week listening to their conflicting directives, while biting back your smart retorts. Or they talk down to you like you’re a servant. Or you know they’re ill-equipped to manage or even do their job. Yet, someone has put them in charge. Yes folks. Like opinions, we’ve all had one horrible boss. At least, that’s how we related to the first Horrible Bosses film.

In the sequel to the hit film where lowly employees act out every subordinate’s fantasy, Kurt Buckman (played by Jason Sudeikis), Nick Hendricks (Jason Bateman), and Dale Arbus (Charlie Day) are back. This time, Nick and company are their own bosses. They’ve managed to do what most people in their position have wanted to do: they’ve created a product and started their own company. In this case, they’ve invented the Shower Buddy. In a Shark Tank-like experience, super product company, Boulder Streams, asks them to sell their company. When they refuse, the head of Boulder, Bert Hanson (Christoph Waltz), masterminds an unethical way of forcing them out of their company, stealing their product and leaving them on the brink of bankruptcy.

Naturally, our guys resort to crime as a solution: they’ll kidnap Bert’s son, Rex Hanson (Chris Pine) and ransom him for the money they owe. If only our favorite trio of lackeys were smart enough to pull off their plan. Instead the guys foil their own plot at every turn, like when Kurt secretly records a conversation and then produces said recording to the person he’s recording. Then again, if the guys weren’t the world’s most inept criminals, this movie wouldn’t be so hilarious.

Writer/director Sean Anders (with story help from John Morris, Jonathan Goldstein, and John Francis Daley has managed to make a sequel that is better than the original film. This second Horrible Bosses is funnier and more twisted than the first. Their deft writing of situational comedy feels fresh. Indeed, the surprise twists really keep the audience on their toes. Without ruining the film, Pines’ Rex is a great villain in that he outsmarts the ultimate villain of the film: his father.

Not to knock the good movies of 2014, but Horrible Bosses 2 is one of the best films of the year. It’s been a while since I’ve laughed that hard at a film and had that much fun at the movies. Horrible Bosses 2 is intensely hilarious and all the actors seem better at playing their characters this time around. Then again, Sudeikis, Day, and Bateman are great character actors.

Likewise, Jamie Foxx’s Dean “MF” Jones steals the show. Unfortunately, Dean lacks enough screen time to give the full breadth of the character. Although, there’s always part three. Speaking of part one characters, Jennifer Aniston’s Julia makes a comeback to dizzyingly sexed-up hilarity. It’s odd to see Aniston as a raunchy dentist, but she pulls it off.

Kevin Spacey is also back as Dave Harken, Nick’s really mean ex-boss, now in the slammer. For an idea of Spacey’s performance think House of Cards’ Frank Underwood with an angry and frozen face. Spacey hilariously channels his inner mean and still manages to be a likeable character. Spacey, who once played the Keyser Soze, is just that good.

Lastly, Sudeikis, Day, and Bateman have dialed up the comedy factor. Their characters seem funnier , yet dumber than before. The audience can really see why they weren’t cut out to be the boss, which brings up the major point of Horrible Bosses 2.

Not everyone is cut out to be the boss or to lead. Some people flourish better under someone than in charge. Unfortunately, being nice to your employees isn’t really a requirement to lead. Instead, being apt and capable to do the job at hand is a requirement. And, if you can’t successfully carry out your own criminal plan, like kidnapping and ransom, then you’re not equipped to lead. Carrying out plans to profitable ends makes horrible bosses a necessary evil; even if you fantasize every day about getting rid of them.