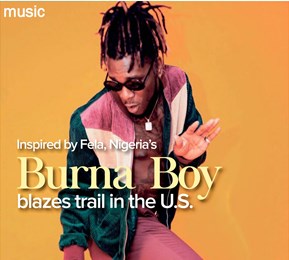 NEW YORK (AP) – Burna Boy was only six years old when Afrobeat pioneer Fela Kuti passed away, but that was enough time for the future musician to be inspired.

“Everyone’s got their hero,” the 28-year old Nigerian performer said. “For me, that’s my hero.”

Kuti – the Nigerian musical icon and political agitator whose life and legacy was portrayed in the wildly popular Broadway musical “Fela!” – was once managed by Burna Boy’s grandfather, someone else he calls a hero.

With a direct line to African musical royalty, it might seem serendipitous that Burna Boy was handpicked to participate in the soundtrack for one of 2019’s most anticipated films, a story which follows the journey of a family – regal in their own right – that happened to be set in his home continent: ”The Lion King.”

But despite Beyonce curating the album and the worldwide attention the film garnered, Burna Boy, whose real name is Damini Ebunoluwa Ogulu, isn’t feeling the pressure.

“Pressure is a man that is wondering how he’s going to feed his five kids today,” he said. ”And I wasn’t feeling that.”

His song appears on “The Lion King: The Gift,” which was inspired by the film and features several Beyonce songs (the pop star voices the character Nala in the movie.) It’s possible that many Americans hadn’t heard of Burna Boy before his appearance on the soundtrack with his song “Ja Ara E,” a Niger ian slang phrase that means to “wise up” or “use your head” – generally cautioning someone to avoid peer pressure. Queen Bey flew him to Los Angeles to record the song, although he admitted he didn’t really have any interactions with her.

But outside of the U.S., Burna Boy has been a very familiar face around the globe and on global music charts. July was a big month for the performer: A week after the Beyonce album was released, he dropped his fourth album, “African Giant.”

Claiming to have coined the term “Afro-Fusion,” a genre that stitches together Caribbean influences, R&B and pop all threaded by Afrobeat, only a man with his confidence would give his album such a gargantuan title. But while he tapped popular figures such as Future, Jeremih and YG for his latest project, he’s not setting out to chase western fame.

“One thing about America is Americans are real people. So it’s like if they see that you’re real, this is real, then they’re gonna relate to it,” he said.

More American eyes were centered on Burna Boy in June at the BET Awards, where he was named best international artist. His mother, who steers most of his career, provided one of the signature moments of the show when she appeared onstage to accept his award.

“The message from Burna, I believe, would be that every black person should please remember that you were Africans before you became anything else,” said Bose Ogulu, who received a standing ovation from the audience.

Her words are also the last you hear on his album.

“I was getting a drink,” Burna Boy said, explaining why he didn’t go onstage to accept the honor. “She probably did a better job (than I would have).”