Movie about Barack and Michelle misses the mark 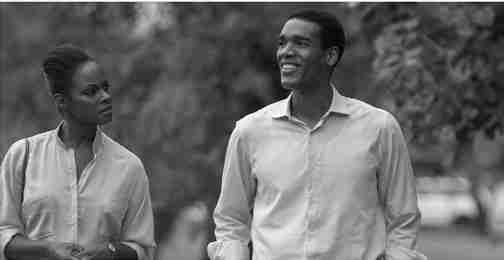 I love President Barack and Michelle Obama. I love that they appear to be a genuine couple and they have added to the greatness of the United States of America. They’re also an inspiring couple; so inspiring that a filmmaker decided to make a movie about their first date.

In Southside with You, writer/director Richard Tanne takes the audience on a “first date” that’s not quite a date. It’s the summer of 1989 and Barack Obama (played by Parker Sawyers) has decided to take his summer internship advisor and second year associate, Michelle Robinson (Tika Sumpter), to a community meeting in the Southside of Chicago. Now, the “date” begins in the morning and the community meeting isn’t until 4 p.m.. But, Barack’s plan is to sweep Michelle off of her feet until she decides that this will be their first date.

It sounds winsome and like a sweet date movie, except, I don’t think romance is Tanne’s forte. much better. As it is, Southside with You is a 45-minute film agonizingly drawn out to 84, boring minutes where we don’t get a break from the Barack and Michelle show.

On this “date,” Barack (or Barry as some of the characters call him) takes Michelle to the Art Institute of Chicago to see African art, lunch by the fountain of the Art Institute’s courtyard, African dancing in the square, a community meeting for the Altgeld Gardens Public Housing, walking along the river, dinner, drinks, an evening showing of Do the Right Thing and a historical moment over ice cream at Baskin-Robbins. It sounds like a pretty good date on paper that the Obamas have recalled positively in interviews.

This film may have been intended to be a love letter to the first couple, but there are sour grapes that don’t make it feel much like love. Michelle is played more as a shrew than a strong character because she’s too busy berating herself and Barack. She’s busy calling him on every bad trait that he has and doesn’t seem to be enjoying the date. How can Barack enjoy the date either? According to Tanne’s portrayal, he’s too angry about his father’s absence and how he was treated as a young man.

Granted, this is a story about the people we love before they became famous, however, this film could have been way better. It suffers from being produced by someone who may not have gotten the full story from the people who lived the experience. Notwithstanding his research of articles and interviews that the couple has done over the years, it feels like Tanne doesn’t really get them.

In an interview with Erik Luers of Filmmaker Magazine, Tanne said, “There’s something special about the way the President and the First Lady look at each other. To me, their connection feels authentic, deep, and vibrant.” Too bad his interpretation of their connection was not translated into the film. From his point of view, Michelle and Barack’s connection is not authentic or deep or vibrant. What the audience sees is a man try and fail and try and fail, again, to woo a cynic.

By all intents and purposes, this was sup- posed to be a good first date for the couple. That did not come across in this movie. Maybe it’s because Sumpter and Sawyer just don’t mesh. Maybe it’s the Michelle Obama caricature eyebrows on Sumpter. The lack of onscreen chemistry was hard to watch because it appeared they were stuck together until the credits rolled.

While the film has won rave critical reviews from its successful Sundance run, I did not like this movie. Many are undoubtedly tempted to see Southside with You because we all love the Obamas and hate to see them leave; however, the first couple deserve a better biopic where we really get to see them and not someone’s speculation of them that seems to have greatly missed the mark.

Next post Grilled skirt steak gets a kick from salsa, black beans