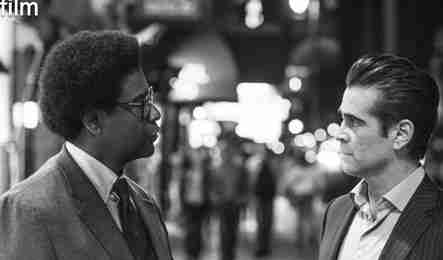 In Dan Gilroy’s “Roman J. Israel, Esq.,” Washington has challenged himself with one of his most complicated and singular roles. The title character (played by Washington) is a veteran activist attorney. After decades spent as a brilliant behind-the-scenes legal mind, the death of his more renowned partner brings Israel out into the open.

For an actor whose most powerful performances (“Malcolm X,” ″Glory,” ″training day”) have been monuments of power and strength, Israel is an oddity — a loping, rumpled, anti-social loner who Gilroy and Washington say has asperger’s syndrome. But he’s also a part of Washington’s more recent roles (the tragic Troy Maxson in “Fences,” the alcoholic pilot of “Flight”) that have stretched the actor in new directions.

“I’m looking at the guy in the mirror,” said Washington. “That’s who I’m challenging.”

Washington met the Associated Press for an interview in Midtown Manhattan earlier this week during a day’s break from shooting the thriller sequel “The Equalizer 2” in Boston.

His affection for Israel was obvious. it’s the only movie, Washington said, where he’d found himself quietly pleading to his character to make better choices.

But the moves made by Washington — arguably the biggest movie star on the planet — remain fascinating, too.

AP: You’ve compared Roman to “Cornel West on the spectrum.”

Washington: Cornel is brilliant and different. I don’t know if he’s on the spectrum but who cares. He’s just bright and articulate and down for the cause, and there’s a lot of that in Roman.

AP: Where did Roman’s walk come from?

Washington: I did a lot of research on the spectrum. In some people, it talked about a lack of coordination — in some people, not everyone. I was attracted to that. It was something i could physicalize. I forget how I actually got to it, but I decided to wear shoes a couple of sizes too big.

It changed everything. It changed the way I walked, just trying to keep them on.

AP: Do you often start with something like that?

Washington: I like to get the shoes sooner than later. It gets the ball rolling.

AP: You had a close brush with Dan Gilroy’s brother, Tony, whose “Michael Clayton” you passed on.

Washington: Yeah, made a mistake there! It worked out all right, though, for Tony. And for George (Clooney).

AP: Did you have a feeling of starting a new chapter after “Fences”? You spent years performing that on Broadway and directing the film adaptation.

Washington: Increasingly, I’m only going to do what i want to do, professionally. So I don’t know what I’m going to do next. Film-wise, I don’t. I do on the stage. (Washington will headline a revival of Eugene O’Neill’s “The Iceman Cometh” on Broadway.) And that’s OK. Take my time. The time I have left and the opportunities that I have left, I understand that that’s finite. How can I be the best that I can be? And what interests me? Where’s the new territory?

AP: Troy from “Fences” and Israel both share a disconnect with younger generations. Has that been on your mind at all?

AP: This year marks the 25th anniversary of “Malcolm X.” Like him, you’re the son of a preacher. Do you feel as though you’ve followed in your father’s footsteps at all?

Washington: For a time, it sent me in another direction. That can be a pattern for (a) preacher’s son. I had to go to church, so it wasn’t fun. I didn’t know anything different. Being a minister’s son, having grown up in the church and learned the cadence, it was probably easier to play that part. I had some idea of different rhythms.

AP: I suspect you’d be good at the pulpit.

Washington: Well, it’s not performance-based if you mean what you say. And you better mean what you say. My father did. He believed it with every fiber of his being. He was a man of God and we share that. For him, the pulpit was wherever he was. My father was a minister and my mother owned a beauty shop. So that seems like perfect breeding ground for an actor. That covers a lot!

AP: Many expected you to win your third Oscar in February, not Casey Affleck. Were you surprised?

But I’ve seen it all, I think. No, I haven’t — not the way that show ended! I haven’t seen that before!

AP: Is there a film you saw at a young age that changed your life?

Washington: “Super Fly” and “Shaft.” When i was 14, 15, “Shaft” especially. Here was a guy — I didn’t know who he was — but he walked around and he had his own theme music. He had a leather jacket on. He seemed to be in control and he was sticking it to the man. I remember seeing those movies and you were picking who you wanted to be: Super Fly or Shaft. I wanted to be Shaft.

Next post Black and Baseling? Here are some events you don’t want to miss!