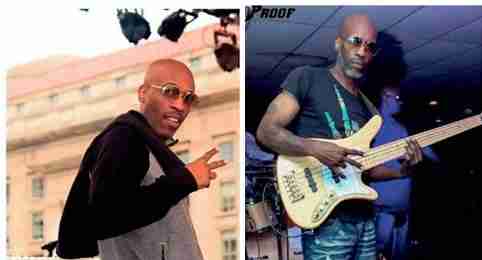 WASHINGTON – One of the surefire clues that someone has answered their calling and is living their passion is the easy expertise at the involved talent. Byron “BJ” Jackson’s calling was music and at it, he was a genius. Not only did he play the drums, keys, and bass; he sang, wrote, and produced scores of songs of all different musical genres. When he wasn’t in the recording studio, BJ was living life on stage. Jackson died of cancer during the Labor Day weekend.

Friends call him a gifted yet humble artist who never needed the spot light to shine and was pure magic on stage. “People like BJ, only God can do that, only God can give you that kind of gift,”, says childhood friend and fellow band mate, Donnell “D. Floyd,” during an interview with WUSA News Channel 9. “That’s right,” agreed Andre “Whiteboy” Johnson of Rare Essence, “he was what he was supposed to be. Like Michael Jordan was supposed to be a basketball player, BJ was supposed to be a musician.”

Jackson’s friends and colleagues celebrated his life and remembered him as a musical legend who was loved and respected as a man, father and brother to many.

If Go-Go is the heartbeat of DC, BJ was the blood line that it pumped through. His soundtrack – the gifts he leaves long-time friends and bandmates Johnson from Rare Essence and Floyd of Team Familiar.

“His lines were so melodic,” said Floyd, “if there were a thousand keyboard players and I was blindfolded I could walk my way to BJ.”

BJ played three, 45 minutes sets with Team Familiar one week before his death. Friends say though he knew the end was near, he was at peace with God’s plan and he played through the pain for the love of music.

Team Familiar had two shows after he passed on Sunday; they had to cut the first show short. “We just stopped the band and everybody cried,” Floyd recalled.

“He was just a genuine guy, everybody loved him, he never argued,” said Johnson his voice cracking with emotion, “he was a great musician and to lose a person like that, it’s rough – he was my friend.”

In his 30 year career, BJ also played with Meshell Ndegeocello, Maxwell, Arrested Development, Ledisi, Lalah Hathaway, Rashaan Patterson and many others. “This morning Team Familiar and the Go- Go world lost one of the all-time greats. Rest in peace, Byron Jackson. Your music and your memory will live in our hearts forever,” the band, Team Familiar, wrote on its Facebook page.

It was not until this past year that Floyd found out that “BJ” was ill. “The fact that Jackson worked doing what he loved despite his illness, is the best illustration of his resilience, his commitment and his total immersion in what he loved,” says Floyd. After playing with Team Familiar a week before he passed away, he then traveled to St. Louis to play a tour date with El Debarge before spending his last week in the hospital. “By Saturday, it was pretty evident that he wasn’t going to make it,” said Floyd. “It’s been extremely hard.” A “celebration of life” was held on Wednesday, Sept. 14.