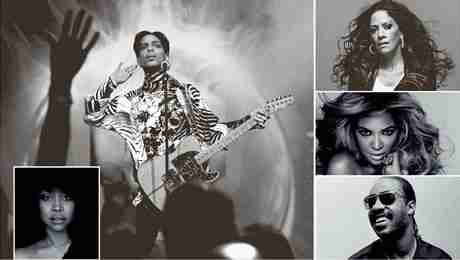 NEW YORK – On his own, Prince was a revolutionary recording artist and one-man band.

But the nearly-40 year career that ended with his death on April 21 was hardly a private party. The other half of his musical legacy were his many collaborations and contributions, whether joining Stevie Wonder on stage in Paris for a spontaneous jam of Superstition or writing such future hits as I Feel for You and Manic Monday and giving them to other artists. In an industry where collaborations with other artists and credits are negotiated as heavily as world treaties, Prince followed only one credo when it came to working with others: the love of the music.

“Oh yes, he loved helping other people,” said his friend and former fiancée Sheila E., “and helping people by saying, ‘Hey, here’s a song you might want to do or like, I think this fits you, or you know come into the studio and see if we can work together.’”

Among the countless tributes to Prince over the past few days were stories of his generosity and inspiration. On her Facebook page, Erykah Badu shared a litany of memories “That time Prince was your rhythm guitarist then sent you the picture. The time Prince was so gracious to come to your club in the hood of South Dallas and play for 4 hours into the night…The time you recorded Today — the earth song’ at Paisley Park. All the times y’all shot pool and argued over religion.”

Ken Ehrlich, the veteran producer of the Grammy Awards, told The Associated Press about luring Prince to the 2004 ceremony, where he would memorably team up with Beyonce on Purple Rain and Baby, I’m a Star. “I had asked him on several occasions before.

I had never had much success,” Ehrlich said. But as soon as he heard he would perform with Beyonce, Prince replied, “I’ll do it,” the producer said.

Prince called him and asked that they meet at a rehearsal hall in Los Angeles. Paisley Park. All the times y’all shot pool and argued over religion.”

“In one day, he had laid out the entire medley” that he and Beyonce would perform, Ehrlich said. “He put his guitar down, and he looked at me (with) a ‘look what I did’ smile,” the producer recalled. “It was like a school kid showing off for the teacher.”

Singer Kandace Springs told the Associated Press that she was contacted by Prince a couple of years ago through Twitter after he saw a YouTube video for her cover of Sam Smith’s Stay With Me. Skeptical at first that the encouraging notes really were from Prince, she was on a plane to his home in Paisley Park within days and was asked to close his 30th anniversary concert for Purple Rain. At the time, she said, she was being encouraged to take on an urban hip-hop sound, but she considered herself more of a jazz artist.

“He spoke straight into me, ‘You need to be who you are, not be what some other people tell you,’” she recalled.

Previous post TO A COMPASSIONATE MOTHER FROM A CARING SON