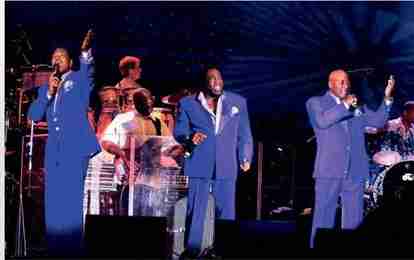 NEW YORK – The iconic R&B group The O’Jays has always made music for the heart. Now the group is going for the jugular on what it says is its last album.

The Rock and Roll Hall of Fame inductees known for the classic song “Love Train” on Friday released the politically charged single “Above the Law,” which explores racial and class inequality. The lyrics include: “Game is fixed/ Pure parlor tricks.”

The single will be part of The O’Jays’ final studio album, the socially conscious “The Last Word,” their first original material in almost 20 years, which is set for release Feb. 22 from SCurve Records.

Group co-founders Eddie Levert Sr. and Walter Williams Sr. told The Associated Press this week that the group didn’t intend to make new music as it looks toward retirement but felt compelled by what it has seen over the past few years.

“You almost have to say something. You almost have to get involved. You know, it’s bad. I’ve never seen it this bad,” said Williams, 75. “You have to say something. You have to do something. People have to get out and vote to change things if they want change.” “Above the Law” was composed by Betty Wright and Angelo Morris, and produced by Steve Greenberg, Wright, Mike Mangini and Sam Hollander. More of its lyrics include the lines “Re-invent slavery/ Erase the war on poverty/ Separate primarily/ By class.” “As soon as I heard it, I told Mr. Greenberg, `’We are all going to jail,”’ Williams said, laughing. “He said, `Don’t worry about it. I’ll be the guy that gives you the cake with the file in it.”’ The cover, by artist Christa Cassan, shows businessmen with briefcases riding flying pigs over the Capitol. A lyric video for “Above the Law” begins with a $100 bill being burned, before showing photos of black men manhandled by the police, scary newspaper headlines, White House press secretary Sarah Huckabee Sanders and Supreme Court Justice Brett Kavanaugh.

Levert, 76, said he feels like he’s stepped back in time to when he was a child in Alabama and the Ku Klux Klan was terrorizing people. He watched with alarm as white supremacists are walking through U.S. city streets once more. “Now, it seems like we’ve done a 360-degree turn and gone back to those same times when they can hang and shoot and kill people just because of their color,” Levert said. “Walter and myself, we’re living this twice. It’s like repeating yourself. It’s crazy.”

Williams and Levert formed the band in Canton, Ohio, in 1963, alternating as lead singers. Hits from their peak in the 1970s and 1980s include “Backstabbers,” “Love Train” and “Use Ta Be My Girl.” The group’s last album of new material, “Love You to Tears,” appeared in 1997.

While known for their funky, soulful songs, The O’Jays often tackled social issues, as with “For the Love of Money” and “Put Your Hands Together,” in which they urged “praying for all the people who are sleeping in the street.” They had a hard time getting radio stations to play “Rich Get Richer,” which argued: “The people who live on the hill/ Don’t have time for the ghetto.”

But “The Last Word” will be the group’s most powerful political statement yet. Another track is called “Stand” and speaks of how love is needed to heal. “Turn off the TV to avoid the news/ Look up to heaven ‘cause I’m so confused/ Another child lost to the city.” As for this being their last album, the singers insist they’re trying to be realistic. “I’ll be 80 in four more years. What girl is going to fall out and scream on the floor for an 80-year-old man? It’s time,” Levert said.

His bandmate agreed: “If, in fact, we see one fall out, she really fell out!” Williams joked. “Somebody better call the paramedics.”

Next post The Hate U Give' book changing perceptions