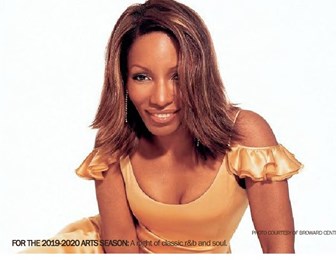 FORT LAUDERDALE, Fla. – The iconic group The Whispers have been recording and performing since the early ’60s with classic hits “Rock Steady,” “Keep on Loving Me” and “As the Beat Goes.”

Stephanie Mills also has an illustrious 35-year career that spans studio recordings to live concerts to Broadway, with notable hits such as “Home,” “The Power of Love,” and “What You Gonna Do With My Loving.”

Rising to fame as “the little girl with the big voice,” while starring for five years in the hit Broadway musical, “The Wiz,” Mills has become one of the most distinctive voices in contemporary music.

The Grammy and American Music Award-winning recording artist, with her ultra-soulful sound and captivating onstage energy, has had five best-selling albums and ten Billboard #1 singles.

The Broward Center for the Performing Arts is presenting these dynamic artists on Friday, Oct. 4, at 7:30 p.m. in the Au-Rene Theater. Tickets are $47.50 – $125 and available online at browardcenter.org, parkerplayhouse.com or ticketmaster.com; by phone at 954-462-0222; in person at the Parker Playhouse box office, Tuesday through Saturday from 12 p.m. – 5 p.m.; and at the Broward Center’s AutoNation Box Office.

Next post For the foodie in you: Agrarian artistry, at the GreenMarket