50 million could watch Mayweather-Mcgregor in the United States alone 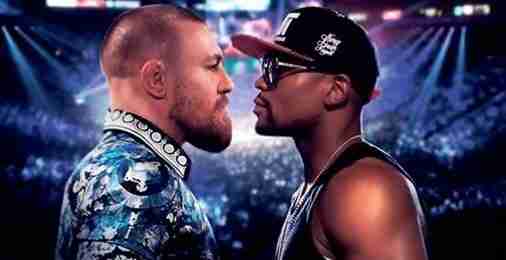 Floyd Mayweather Jr. and Conor McGregor face off before the big fight.

LAS VEGAS (AP) – Conor McGregor’s improbable challenge of Floyd Mayweather Jr. could be seen by a staggering 50 million people in the United States as fans and the curious gather in small and large parties.

The fight Saturday night threatens the pay-per-view revenue record set by Mayweather and Manny Pacquiao two years ago and could dwarf it in viewership as people use the event as a reason to have friends and family over for a little escapism and controlled violence.

“It’s a cultural event that crosses all demographics and all social and economic factors,” said Mark Taffet, who formerly ran pay-per-view for HBO. “People are getting together to have a great time and we surely need an excuse to have a great time.”

Taffet said that while an average of 5-6 people normally watches a pay-per-view, he wouldn’t be surprised if the fight averages 10 people a household. If it sells 5 million pay-per-views as widely anticipated, the fight could be watched by nearly one in six Americans.

The fight will also be seen by millions more worldwide, with promoters claiming it will be available either online or on a TV screen to more than 1 billion homes in 200 different countries.

“If you are in Manhattan or you are on a desert island somewhere, if you have WiFi, you can buy this fight,” promoter Dana White said.

Each pay-per-view sale means more money in the wallets of both fighters.

Though estimates vary widely, Mayweather is expected to make some $200 million, while McGregor will likely pocket at least $100 million.

Though ticket sales have been slow in Las Vegas – largely because of astronomical prices – the fight is shaping up as mustsee TV at a price of $99.95. People are expected to buy the fight in record numbers, with many sharing the cost of the telecast with friends and family they invite over.

Taffet said people will treat it much like a Super Bowl by getting together in larger numbers than usual.

“I think this is first and foremost a television event,” said Taffet, who oversaw 190 pay-per-views in his career at HBO. “The success of this fight in the financial record books of history will be made on pay-per-view. And I believe it’s going to deliver.”

Industry observers say it’s hard to judge how many homes will buy a pay-per-view until the day of the fight many times, as people often buy late. But the anecdotal evidence – primarily the chatter on social media – indicates a good likelihood of it smashing the 4.6 million record of pay-per-view sales set by the MayweatherPacquiao fight.

That’s largely because the matchup will likely cross over from being just a sporting event to a party night.

“We have definitely seen massive general market interest in addition to the sports fan,” said Stephen Espinoza, who heads sports for Showtime, which will televise the fight. “These general market viewers are often not part of the audience for even the biggest combat sports event. So the ceiling is pretty high”

Espinoza said the very nature of the fight – a matchup between a UFC star who has never boxed as a pro against one of the greatest fighters of his time – will drive the pay-per-view sales.

An early indication of interest in the fight is the massive betting both in Nevada and in other places where it is legal. Bookmakers say it will be the biggest bet fight ever, with an overwhelming number of the early tickets on McGregor to pull an upset.

Still, there are plenty of tickets left in the arena itself, where prices originally ranged from $2,500 in the upper sections to $10,000 at ringside. Ticket prices have been dropping in the resale market – with some available for less than $1,300 on Tuesday – and are expected to decline more in the days before the fight.

Next post Denver to start licensing first pot clubs, but few may apply