Bucs WR Evans apologizes for not standing for anthem 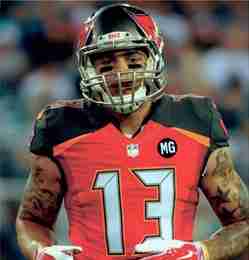 TAMPA, Fla. – Tampa Bay Buccaneers receiver Mike Evans says he will not continue to protest the election of Donald Trump as president by declining to stand for the national anthem before games.

The third-year pro apologized Wednesday to the military and anyone else “truly affected” by him not joining his teammates in standing on the sideline before last week’s game against the Chicago Bears.

Evans stopped short of saying he regretted not standing for the anthem on Salute To Service Day at Raymond James Stadium. He still thinks Trump’s election is not good for the country, but instead of protesting he intends to try to impact the plight of minorities in other ways.

Evans said Sunday he meant no disrespect to the military, but that he viewed the election of a businessman and reality television star to the nation’s highest office as “not a good look for America.”

He said reaction from fans and others on social media has been mixed.

“It’s what I expected. Some people were saluting me, some people were showing evil, and a lot of hate,” said Evans, who’s tied for the NFL lead in touchdown receptions with eight.

“I just want people to understand that you can’t just hate somebody because they have different beliefs and different views than you,” Evans said. “That’s the problem, that’s why I did what I did. That’s what I want people to understand, you can’t just wish harm on somebody because they have different beliefs than you. Everyone didn’t grow up the same.”

Evans, 23, grew up in Galveston, Texas. He said he will reach out to different organizations and “use my voice to help minorities,” including blacks, Latinos, women, the LGBT community and other “people that are in fear of Donald Trump and his presidency.”

“The way people grow up, it shapes the way they think and do things. I grew up in a mixed population, white, Hispanic and black, and I feel all people are equal,” Evans said, adding that he wasn’t surprised by the criticism he’s drawn since Sunday. “It was the Salute to Service game, and so looking back on it I probably would have done it a different way,” Evans said. “But it’s done. It won’t happen again. I’ll be standing with my teammates. But I will be using my platform to bring (awareness).” Quarterback Jameis Winston was among the teammates who said they respected Evans’ right to protest. “Yeah, I talked to him about it and I’m definitely on his side. I respect his beliefs. … I’ve got his back,” Winston said.

“Mike is a standup guy, one of the greatest guys on this football team,” the quarterback added. “What he does on the field, what he does off the field, the type of man that he is, speaks for itself.”

Evans, who has 59 receptions for 811 yards in nine games, said he hasn’t received any backlash in the locker room.

“My teammates are a bunch of great guys. They understand, they know what type of guy I am, they know I’ll do whatever I can do to help them on the field,” Evan said. “They showed me the utmost respect.”