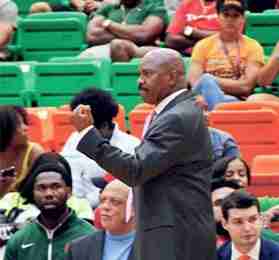 PHOTO COURTESY OF THE FAMUAN

In the debut of Rattlers’ head coach Willie Simmons, Ricky Henrilus’ 1yard dive with 10:50 left in the first quarter gave the Rattlers a 7-0 lead.

The play was set up when Wildcats punter Eli Mashburn mishandled the snap and FAMU recovered the ball at the 8-yard line.

Yahia Aly- who set a school record with six field goals – connected on field goals of 38 and 45 yards respectively to put the Rattlers up 13-0 before the game was suspended with 5:05 before halftime due to lightning. Upon returning to the field 30 minutes later, Fort Valley State’s Lorenzo Smothers struck for a 92-yard run to reduce the deficit to 13-7.