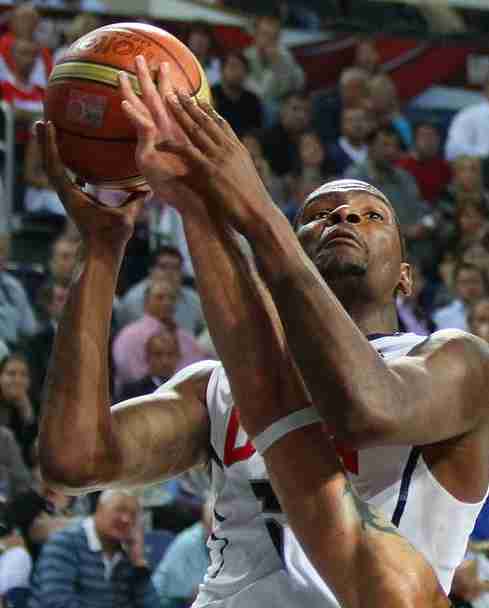 Yes, indeed, KD looks healthy and ready for the playoffs even after five weeks on the sidelines.

“You get a dunk first play of the game no matter how long you’ve been out that feels good,” he said. “… I felt good putting my jersey on, running out with the team. It felt normal again. I’m a basketball player, I love playing basketball, that’s my favorite thing to do, so to feel like I’m a part of the team, feel like I’m a part of this energy that we have feels great.”

With two-time reigning MVP Stephen Curry sidelined by a bruised left knee, Durant shined in 31 minutes and the balanced Warriors won their 14th straight game – the longest unbeaten run in the NBA this season. Durant hadn’t played since getting hurt Feb. 28 at Washington and just resumed full practice Friday.

“I’m extremely proud of him, of course, as always,” said mother Wanda Durant, who smiled, signed autographs and posed for selfies with fans . “We just told him to continue to work hard but not move too fast. Just told him calm down and relax, the doctors said it wouldn’t be long so just wait the time and do what you need to do.”

Klay Thompson scored 20 points, Draymond Green had 13 points and eight rebounds, and the do-everything Warriors sure look poised for another deep playoff run.

Coach Steve Kerr joked about “three meaningless games” remaining after the NBA’s top team wrapped up the best record and No. 1 seed in the Western Conference during Wednesday’s win at Phoenix.

Having Durant back certainly brought some energy.

“I think he looked great. It’s going to be hard for anybody to take off a month and come back and put on a great show,” Thompson said. “It was great to see that first play, him attacking the rim like that.”

Durant raised both hands to the sky and pointed when he took the court before tipoff. His shot wasn’t quite as consistent as usual – 6 for 15 and missing all four of his 3-point tries – as he eases his way back to form after such a long layoff.

“He’s been getting grumpy the last week or so. It was time,” Kerr said.

Durant had an assist to Zaza Pachulia on Golden State’s second possession and dished on consecutive third-quarter Warriors baskets, even bringing the ball up court on occasion in Curry’s absence. He gave everybody a lift just by being back in the lineup.

“I think he’s a little rusty. I think he’ll tell you that,” Pelicans coach Alvin Gentry said, “but believe me, they’re going to be just fine.”

Kerr kept Green and Thompson below 30 minutes as planned.

Jordan Crawford scored 21 points off the bench and Alexis Ajinca added 17 as New Orleans had nine healthy bodies playing on a back-to-back following a loss at Denver on Friday.

Golden State’s Matt Barnes suffered a sprain to his right ankle and foot in the second quarter and didn’t return. X-rays were negative.

Pelicans: New Orleans lost its seventh straight to the Warriors, 17th in 18 overall and ninth in a row at Oracle Arena. … The Pelicans shot 5 for 20 on 3s and were outrebounded 53-34.

Warriors: Golden State posted its 50th 30-assist game with 37, joining the 1984-85 Lakers as the only teams to do so in 50 games. … The winning streak is the third-longest in franchise history behind 28 in a row and 16 consecutive victories, all in the past three years. … Rapper Drake sat courtside next to Warriors GM Bob Myers, a few seats down from owner Joe Lacob and Hall of Famer Jerry West.

As far as Davis’ sore left knee is concerned, Gentry said, “At this stage of the season we’re not going to risk anything.”

Pelicans: At Lakers on Tuesday in the third of four road games to end the season.

Warriors: Host Utah on Monday looking for an eighth straight home win vs. Jazz and eighth overall in the series.

Next post School librarian will bring equipment to jungle classrooms

Previous post What next, after failed repeal of Obamacare?