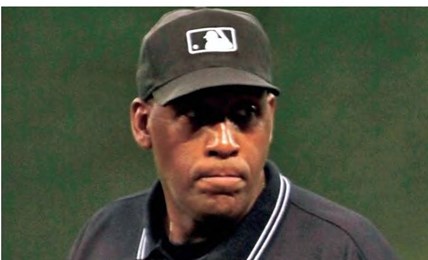 WASHINGTON (AP) – Former major league umpire Chuck Meriwether, who was behind the plate when the Boston Red Sox ended their championship drought in 2004, died Saturday.

Commissioner Rob Manfred made the announcement hours before Game 4 of the World Series. Meriwether had been ill with cancer and died at home in Nashville, Tennessee.

Meriwether called his first big league game in 1987, was promoted to the fulltime American League staff in 1993 and worked for 18 years. He then became a major league umpire supervisor for nine years.

Meriwether had the plate in Game 4 when the Red Sox ended their 86-year title absence by beating St. Louis at Busch Stadium. He also did the 2007 World Series when Boston swept Colorado.

In addition, Meriwether got eight assignments in the Division Series, two in the League Championship Series and two All-Star Games.

“Chuck Meriwether was an accomplished umpire on the field, a role model for our staff and a true gentleman in life,” Manfred said in a statement. “Chuck will be remembered for his genial manner and the outstanding example he set for others, particularly for African American umpires who followed him.”

Earlier this month, major league umpire Eric Cooper died at 52, two weeks after working the ALDS between the New York Yankees and Minnesota.

Next post NCAA board approves athlete compensation for image, likeness