Riley wishes he had done more to keep Wade in Miami 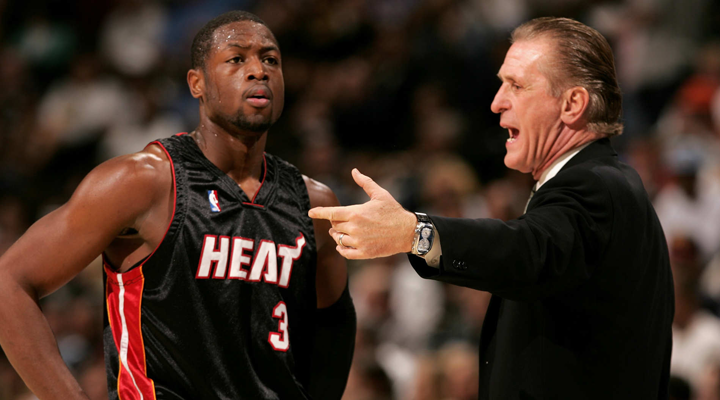 MIAMI – A contrite Pat Riley has revealed that he blames himself for Dwyane Wade’s decision to leave the Miami Heat, adding that he wishes he could have done more to keep the three-time champion.

Riley, the Heat’s president, said if he had the chance, he would have handled Wade’s free agency differently. Wade signed a $47 million, two-year deal with the Chicago Bulls earlier this month, leaving Miami without its franchise leader in several categories and sparking a rebuilding project for a franchise that was in the NBA Finals just two years ago.

“I didn’t make it happen. Dwyane left and so the buck really stops here,” Riley said. “I’m not trying to fall on the sword for anybody. I have great regret that I didn’t put myself in the middle of it and immerse myself totally in the middle of it, get in a canoe and paddle to the Mediterranean if I had to.”

Riley wasn’t in New York when the Heat last met with Wade on July 6, only a few hours before the 12-time NBA All-Star announced that he was picking Chicago. That last meeting was handled by Heat managing general partner Micky Arison and CEO Nick Arison, and in that session, the team’s offer of a $40 million, two-year deal was raised slightly – though not to the level of what Chicago was able to pay.

Riley said he believes Wade’s decision wasnt fueled by money, but rather something else.

“That is where we both failed … I more than he, because he’s the asset, he’s the star, he’s the face of the franchise,” Riley said. “I should have done everything that I could have verbally in trying to change his mindset to mine, a big picture, a better picture, or one that I thought would help him.”

Whether that would have worked is unknown, and irrelevant now anyway. Wade went home to Chicago, and for the Heat It’s now time for the aftermath that follows whenever there’s a superstar-level goodbye. Riley has been through it plenty of times before in Miami, whether it was Alonzo Mourning or LeBron James or Shaquille O’Neal or Brian Grant or Eddie Jones.

This, Riley said, is different.

Riley said he hasn’t spoken with Wade since he decided to leave the Heat. Riley has been working on an email to send Wade at some point, and he expects that when they see each other again, a warm embrace will be involved. Wade indicated the same when he spoke in Miami on July 9, not hiding that there were some hurt feelings but insisting that he will not speak ill of his experiences with Riley.

“My thoughts were always to try to make the team better and at the same time try to make sure that Dwyane, over the course of the three, four, five years that he had left in his career, that he was going to get his money,” Riley said. “He would get it – but not at the expense of paralyzing our ability to win. If there’s anything I could have done better, I would have done it. But right now, there’s no do-overs in this thing.”

Riley spoke for nearly an hour, addressing both the past and the future. The Heat still don’t know if Chris Bosh – whose last two seasons were cut short at the All-Star break by the formation of blood clots – will be able to play again. Bosh is working out and has told the team he intends to play, but that’s hardly a guarantee he will actually be cleared and ready when training camp starts in late September.

The Heat have been unable to give detailed updates on Bosh’s medical status since February. Riley said he can envision a number of scenarios eventually being considered, including ones where Bosh may have a lesser workload in terms of the rigors of travel.

Before any of that, though, Bosh needs to be cleared and deemed able to play.

“It’s a positive environment right now with Chris,” Riley said. “I think his doctors and our doctors are constantly, or moreso now than ever, communicating. I know what Chris wants. I know he wants to play. And obviously we would be open to that, but this is still a very fluid situation.”

So now the Heat move on with a young core.

Hassan Whiteside signed for four years and $98 million, Justise Winslow is targeted as a starting small forward and Miami believes it turned the No. 40 pick in last year’s draft, guard Josh Richardson, into an absolute steal. Riley thinks the Heat can compete for a playoff spot, though that will largely hinge on Bosh’s status.

“One of the only things you can count on in life that’s permanent – it’s one of my favorite sayings – is change,” Riley said. “And when change raises its beautiful or ugly face, you’ve got to deal with it. You’ve got to adapt and move on.”