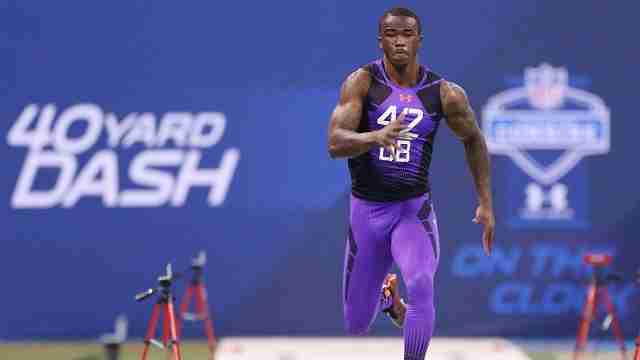 He figured his arm injury was bad, but he still wanted to know exactly what happened.

So Sample sat down with coach Gus Bradley a few hours after breaking his right arm in practice last Thursday and watched the video.

“It was flukish,” Sample said Monday. “It was crazy. You see it every day at practice, where somebody’s elbow hits an arm or something. It was just a crazy break.”

Sample broke his arm while trying to knock the ball out of a teammate’s hands during non-contact drills. He had surgery Friday, getting a plate and two screws inserted in his forearm. He’s scheduled to be re-evaluated Wednesday, when doctors will decide whether to remove the plate and screws.

Sample expects to miss 10 to 12 weeks, a significant chunk of time for a rookie vying for a starting job.

A fourth-round draft pick from Louisville, Sample had been competing with free-agent acquisition Sergio Brown for a starting safety spot alongside Johnathan Cyprien.

Now, he hopes to be back on the field “midway through camp if everything heals up right.”

“It would’ve been great to have him because he was coming along,” Bradley said. “The good news is he’ll be back. We’ll have him for the season. … It’s yet to be seen what exactly the situation is for him as far as practice or what can he go through. Can he do a walkthrough? We’ll compete and do everything we can do to at least get him mentally ready.”

Sample believes he’s up for the challenge. After all, he attended three colleges in four years, so he’s accustomed to picking up defenses quickly.

“I feel like it’s going to be an easy process to deal with,” he said.

Sample started his college career at Washington, spent two seasons with the Huskies and then transferred to American River Junior College. He attended Louisville last year, leading the Cardinals with 90 tackles and four interceptions.

The Jaguars took him with the 104th overall pick in the draft, and he was impressive enough early in organized team activities that they decided to give him some repetitions with the first-team defense.

Getting back with the starters is the challenge now.

“I wouldn’t say I was crushed because injuries are part of the game,” Sample said. “It was just knowing that you work so hard to start getting (first-team) reps and you just got to go back to the drawing board and start all over again and get back at it.”