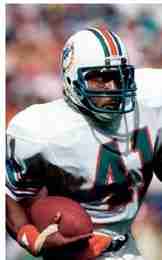 MIAMI –Fulton Walker, the first player to score on a Super Bowl kickoff return, has died at the age of 58 in his hometown of Martinsburg, West Virginia.

Walker scored for the Dolphins on a 98- yard kickoff return in the 1983 Super Bowl. His touchdown put Miami ahead, but the Washington Redskins rallied to win, 27-17. Walker’s return is still tied for third longest in Super Bowl history.