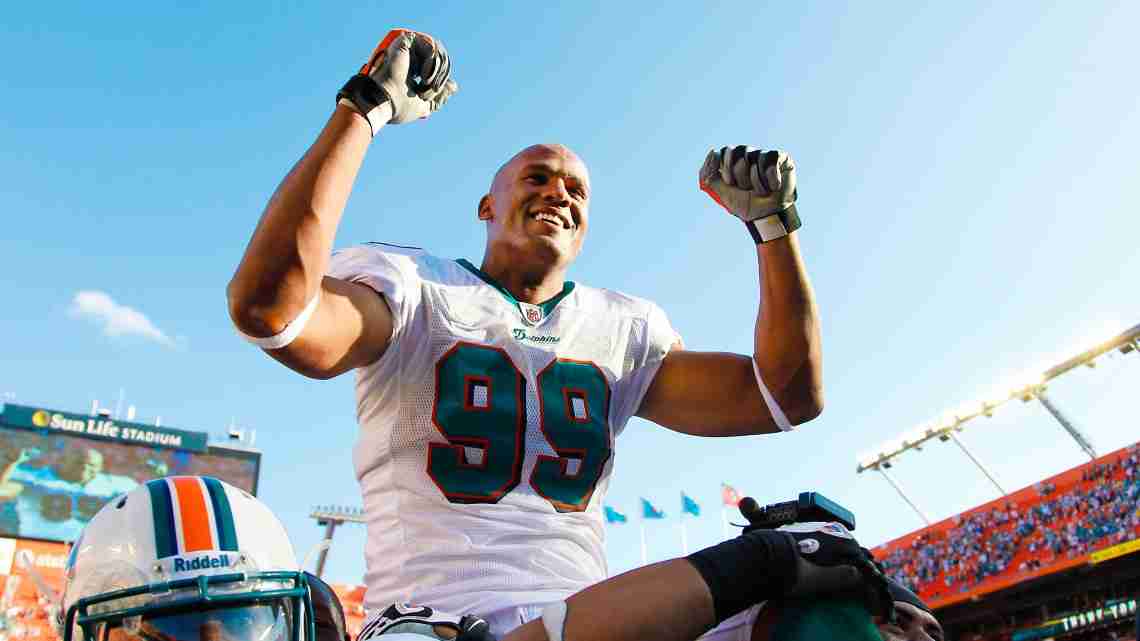 MIAMI – In honor of Father’s Day, Black PR Wire has launched a month long campaign, entitled “Father Figures,” to recognize African American men who have made a profound impact on the lives of others. This special feature edition of “Power Profiler” takes a closer look into the professional and personal lives of incredible men who have taken on the role as a father and father figure. This week’s feature profiler is Pro Football Hall of Famer, Jason Taylor.

Once a home-schooled “Pittsburgh kid” thought to be too skinny for the game of football, Jason Taylor became one of the most feared defenders on a National Football League (NFL) field, and one of the most generous individuals off of it.

Drafted by the Miami Dolphins in 1997, Taylor became the greatest pass rusher in the storied franchise’s 51-year history before moving on to a successful TV and radio career and recently being elected as a member of the Pro Football Hall of Fame’s Class of 2017.

But above all else, it is Taylor’s huge heart that moves him to give back through the Jason Taylor Foundation, which resulted in him being named the 2007 Walter Payton NFL Man of the Year.

Away from the field, Taylor has been equally successful, evidenced by his secondplace finish on the sixth season of “Dancing with the Stars,” his limited edition collection of timepieces with Invicta Watch Group and his role as an NFL analyst for the likes of ESPN, NBC Sports and Sirius/XM NFL Radio.

People named him to its 2008 “100 Most Beautiful” list and US Weekly tabbed him one of “TV’s New Top 10 Dream Men.” In addition, he has been considered one of the “10 Hottest Men in Sports” by Sports Illustrated for Women and one of the Top 20 Best Looking Male Athletes by a panel of Sports Illustrated swimsuit models.

Taylor was the first-ever male spokesperson for the Neutrogena line of health and skin products, a Jordan Brand Sports member of “Team Jordan,” appeared in national television commercials for Home Depot and Sprint, has been a featured model in several national and international print ad campaigns as well as in Men’s Health, GQ, Sports Illustrated, TV Guide, Maxim and FHM magazines, and has appeared on many national TV shows.

Over the course of his 13-year career with the Miami Dolphins, Taylor worked with numerous charitable organizations including the Miami Project to Cure Paralysis, United Way, the Cystic Fibrosis Foundation, First Book, Habitat for Humanity and the Urban League.

In the spring of 2002, he participated in two USO Tours during which he visited military bases and hospitals in Kuwait, Iraq and Germany.

In 2004, feeling the desire to further extend his charitable arm, Taylor established the Jason Taylor Foundation (JTF) in effort to build a better future for the children of South Florida. Since opening its doors, the JTF has contributed nearly $6,000,000 in programs and services to benefit youth. In 2007, the Jason Taylor Reading Room, a comprehensive after-school program designed to address academic challenges among inner-city youth, particularly in the areas of literacy, was proudly launched in Miramar, and now, a second location is in operation.

The Reading Room also features a spoken word poetry component that incubated a full-blown network, now featuring more than 60 public schools. The “bluapple Poetry Network” is rapidly expanding with the launch of “Louder Than a Bomb Florida,” which brings school-based poetry teams together to showcase this art form through a friendly competition, while providing teens from diverse backgrounds a common vehicle for written and performance-based self-expression.

Holtz Children’s Hospital officially renamed its recreational and educational hub as “The Jason Taylor Children’s Learning Center,” 50+ middle-school students have been awarded college scholarships as a result of the foundation’s work with Take Stock in Children, and nearly 750 deserving children have each been given a $300 back-to-school shopping opportunity at Old Navy as part of the “Cool Gear for the School Year” program.

Prior to announcing his retirement from professional football in December of 2011, Taylor built a resume of seemingly endless athletic accomplishments.

Following the 2006 season he was named the Associated Press NFL Defensive Player of the Year, the highest honor bestowed on a defensive player. In addition, he received AllPro honors on four occasions, was selected to six Pro Bowls, appeared on numerous AllNFL Defensive Teams, was named the NFL Alumni Association’s Defensive Lineman of the Year in consecutive seasons (2005-06) and selected for NFL’s exclusive All-Decade team for the 2000’s.

After one-year stints with Washington (2008) and the New York Jets (2010), Taylor returned to the Miami Dolphins in 2011 to play his 15th and final NFL season. He was honored as the Dolphins’ Most Valuable Player on four occasions, was the club’s Leadership Award winner three times and in 2012, his first year in retirement, the Dolphins inducted Taylor into the team’s Honor Roll.

Earlier this year, on February 4 in his first year of eligibility, Taylor was elected to the Pro Football Hall of Fame.

An accomplished father of three – two boys and one girl – Taylor has exemplified qualities on and off the field that have set a standard. Though he has retired from the game, he hasn’t totally left it behind.

Taylor now coaches both his boys in youth football – another role he will surely excel at.