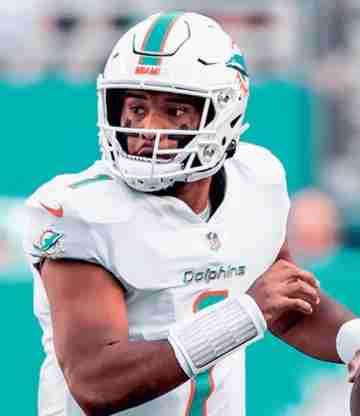 Miami Garden, Fla. (AP) – For a moment, it looked as if the Miami Dolphins would cruise to an easy win over the Pittsburgh Steelers on Sunday night after playing in so many close games this season.

Tua Tagovailoa completed six of seven passes for 68 yards on the Dolphins’ opening drive and capped it with a touchdown pass to Raheem Mostert. Miami forced a three-and-out and an interception on the Steelers’ ﬁrst two possessions.

As the game went on though, Miami’s offense sputtered. Tagovailoa’s passes sailed high. Some passes were behind receivers. At least three could have been intercepted if not for drops by Pittsburgh defenders.

“We just weren’t really coming together. We lacked that rhythm,” Dolphins coach Mike McDaniel said, “and especially after we had in the third quarter, that ﬁrst drive that we went for it on fourth-and-3 in the tight red, felt like right after that we kind of hit a lull that we can all learn from because it was like we got punched in the stomach or something.”

Because of injuries at quarterback, the Dolphins’ offense has had uneven performances all season, which was a big reason for their three-game losing streak.

Sunday was no different, even with Tagovailoa back after missing two games with a concussion.

Miami scored 16 points in the ﬁrst half and none in the second.

“There were just little misses here and there that we had offensively,” Tagovailoa said. “A lot of the misses could have turned into really big plays. Just better execution, and it starts with me.” Miami has played in four one-possession games this season and has won three of them.

Moving the ball hasn’t been the problem, with players such as Tyreek Hill and Jaylen Waddle catching passes. The two receivers continuously ﬁnd soft spots in the middle of defenses.

The Dolphins aren’t taking advantage of trips to the red zone.

“It is frustrating for the whole team,” McDaniel said, “and we’re not going to be able to just have to outscore 10 points every time to win games, so we’ve got to ﬁnd a way to get better at that, which we’ll be focused on moving forward.” WHAT’S WORKING

Despite missing several key players on defense, the Dolphins forced three turnovers and came away with an interception for the ﬁrst time since the season opener against New England. Miami also only allowed the Steelers to convert four of 14 third down attempts.

“This is something that we’ve been making a big point of emphasis within the team on turnover differential,” McDaniel said.

Red zone efficiency. Miami scored once in three trips to the red zone. Getting Hill and Waddle more involved in the red zone should be a priority moving forward, as neither player has a touchdown since Week 2.

Noah Igbinoghene, a 2020 firstround pick, had a rocky start to his NFL career but has seen an increased role in the past two games because of injuries in the secondary. The cornerback has stepped up when he has needed to. After being involved in several pass breakups against the Vikings last week, Igbinoghene caught a game-sealing interception of the Steelers’ Kenny Pickett.

Running back Chase Edmonds dropped two passes against the Steelers, including a wide-open one in the first half that would have been good for a first down. He has taken a back seat to Raheem Mostert, who has emerged as Miami’s clear No. 1 option at running back. Edmonds hasn’t had double-digit carries since the season opener and finished Sunday’s game with seven carries for 17 yards.

The Dolphins suffered another injury in their secondary when safety Brandon Jones left the game in the third quarter with a knee injury. McDaniel said Monday that Jones will be placed on injured reserve.

After two straight home games, the Dolphins will be on the road next week to face the Detroit Lions (1-5) for the first of what should be an easier stretch of games than they’ve seen in the first seven weeks. Five of Miami’s next six games are against teams with losing records.