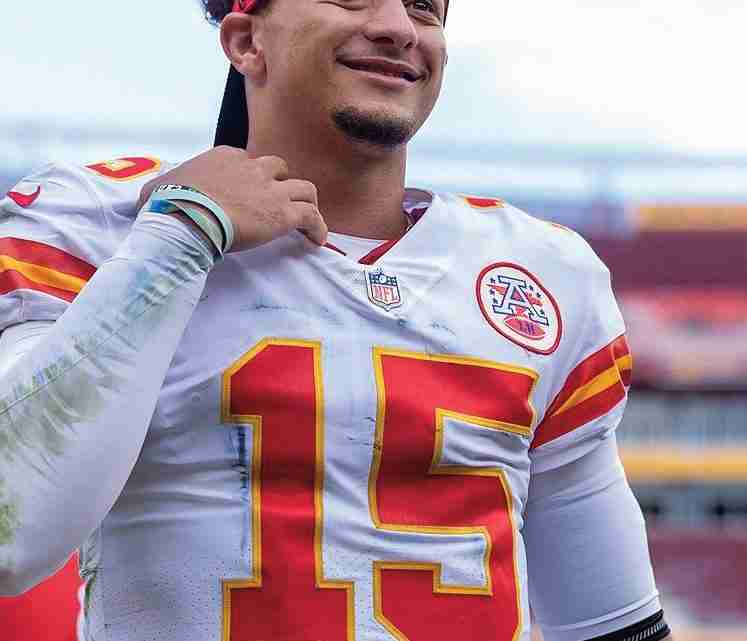 Kansas City, Mo. (AP) – You could spend about a year describing the frantic two minutes that led to overtime between the Bills and Chiefs on Sunday night, when Kansas City rallied for a heart-pounding 42-36 victory to reach its fourth consecutive AFC title game.

Or you could use two words: Patrick Mahomes.

It didn’t matter to him that the Bills had taken their ﬁrst lead since the ﬁrst quarter when Josh Allen hit Gabriel Davis with a fourth-down touchdown pass with 1:54 left; Mahomes simply threw a 64-yard TD pass to Tyreek Hill to take it back.

Or that Allen had come right back to ﬁnd Davis again, this time with 13 seconds left, to seemingly push Buffalo to its ﬁrst road playoff win in nearly three decades; Mahomes merely threw a pair of darts to Hill and Travis Kelce, moving them 44 yards in 10 ticks, setting up Harrison Butker’s 49-yard ﬁeld goal to force overtime.

The reality is this: Mahomes has the ability to take his game to a level few can touch.

With unflappable poise and unwavering conﬁdence, Mahomes ﬁnished 33 of 44 for 378 yards with three touchdown passes and no interceptions, setting a franchise playoff record for completions along the way. He also ran for a game-high 69 yards, including a daring-do touchdown run in the ﬁrst half in which his moxie was on full display.

The last of his TD passes went to Kelce in overtime, sending the Chiefs back to the AFC title game against Cincinnati.

“He made everybody around him better, which he is great at, and he just does it so effortlessly,” Chiefs coach Andy Reid said. “When it gets tough, he’s going to be there battling, and players appreciate that.”

Reid knows a little about playoff-caliber quarterbacks. He once tutored Hall of Famer Brett Favre in Green Bay, and he got the most out of Donovan McNabb when the two of them took Philadelphia to the Super Bowl.

“Every time he comes in the huddle, he says, `Let’s be great.’ That’s a great characteristic to have,” Reid said. “And when he says it, it’s not corny. It doesn’t come off that way. The guys believe in it and he tries to do it every snap.” He’s made a believer out of everyone around him, too.

“This is deﬁnitely another step for him into the Hall of Fame,” Hill said. “He’s deﬁnitely at the top of the helm when it comes to quarterbacks in this league. We know it, but I feel like the rest of the league sometimes doubts him because of the coach and players that he has around him. If you watch the guy – if you truly know Pat – and the amount of time he spends on game ﬁlm and understanding coverages and going out there and making a play out of nothing, it’s just crazy.” WHAT’S WORKING

Everything in the Kansas City offense. Let’s not forget that it was against the NFL’s top-ranked defense Sunday night that the Chiefs set a franchise playoff record with 552 yards of total offense. That included a whopping 182 yards rushing, which will probably be overlooked because of Mahomes’ air-it-out heroics over the ﬁnal few minutes.

Let’s also not forget that the Chiefs needed those heroics because their own defense turned into a second-half sieve. Allen diced it up for 329 yards passing while Davis caught eight passes for 201 yards with a playoffrecord four touchdowns.

Clyde Edwards-Helaire returned for the ﬁrst time since hurting his collarbone Dec. 26 against Pittsburgh. And despite playing limited snaps, he gave the Kansas City offense another dimension. Edwards-Helaire ran seven times for 60 yards that’s more than 8 1/2 yards per carry while adding a nifty catch out of the backﬁeld.

Darrel Williams was inactive because of a bothersome toe, allowing Jerick McKinnon to solidify his place in the Kansas City backﬁeld. McKinnon ran 10 times for just 24 yards, but also had ﬁve catches for another 54 yards.

FS Tyrann Mathieu sustained a concussion when he took a knee to the helmet on the game’s opening series. His backup, Daniel Sorensen, once again struggled in his place. Mathieu’s status will be crucial with Bengals quarterback Joe Burrow and his group of playmaking wide receivers on their way to Arrowhead Stadium.

KEY NUMBER 19: Lost amid the chaos Sunday night was the fact that Reid moved into a tie with Hall of Fame coach Don Shula for third on the career list with 19 postseason wins. Another one over the Bengals, which would be Kansas City’s seventh straight home playoff win, would send Reid into a tie with Tom Landry for second.

The Chiefs are fortunate to have plenty of experience playing this time of year, because it could be a challenge to move past their thrilling win over Buffalo. It also helps that the Bengals beat the Chiefs 34-31 in Cincinnati in the penultimate game of the regular season, costing Kansas City the No. 1 seed and a ﬁrst-round bye.